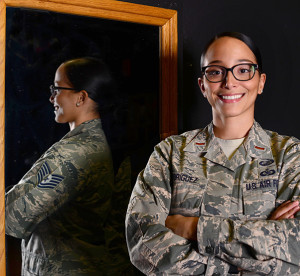 Around this time in 2015, Caroline Rodriguez was serving in the rank of technical sergeant in the U.S. Air Force. She still serves today, but in a slightly altered uniform and has assumed much more responsibility.

Her career began when she enlisted right after high school to achieve further education without the risk of accumulating debt.

“As I got a little more experience in the military, I really liked the environment, the camaraderie and the people,” said 2nd Lt. Caroline Rodriguez, 355th Comptroller Squadron financial services officer.

During her nearly 12 years in the enlisted ranks, Rodriguez was able to finish her degree in accounting and pursue her dream of becoming an officer.
Rodriguez grew up in New Jersey under a single mother whom worked three jobs to take care of her and her brother.

“She worked really hard and I think that work ethic was instilled in me,” Rodriguez said. “I do a lot of things for myself, but I also do (them) for her to show her that her hard work has paid off.”

The former noncommissioned officer felt like she had a unique leadership perspective to offer.

Rodriguez believes it is important to keep the well-being of others in mind while setting goals for herself.

After submitting her package to OTS, Rodriguez waited a nerve wracking three months for the news of her acceptance. There was no set date for her to receive the results, so when she was pulled into a meeting and welcomed by her commander into the officer corps she was surprised and elated.

“My face just lit up and I almost started crying, I was so overjoyed,” Rodriguez said. “It was an emotional day, I could not believe it.”

The nine-week-long, high-stress environment of OTS provided Rodriguez with the tools necessary to become an effective officer in the U.S. Air Force.

“It took a lot of hard work and dedication to make it where I wanted to be, it wasn’t just given to me,” Rodriguez said. “I know that if I can do it, my Airmen can too as long as they just focus on what they want, and realize it’s not going to happen overnight.”