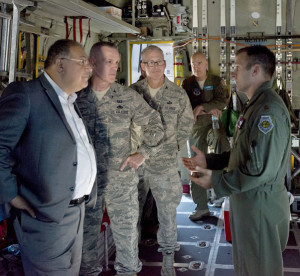 This upgrade, to the Rolls-Royce T56 Series 3.5 engine, has already been approved for the LC-130s used by the New York Air National Guard in support of the National Science Foundation, and now the ANG is evaluating rolling out the upgrade to the rest of its legacy C-130H fleet.

“The Series 3.5 engine upgrade certainly increased the performance on time and fuel flow and altitude,” said Rice. “So it’s a great improvement as well for the capability and reliability of the engine from a maintenance standpoint. It was really impressive.”

The demonstration aircraft, assigned to the Wyoming ANG, will be used in an operational utility evaluation in order to inform the decision to push the Series 3.5 engines to the rest of the ANG’s C-130H fleet.

“We’re confident right now that we’ll see in excess of 12 percent fuel savings and upwards of 25 percent increased time on wing, which will reduce maintenance time,” said Col. Kevin Campbell, ANG director of Plans and Requirements. “Those are substantial, and would provide a fairly rapid return on investment. This upgrade would pay for itself; the real question is ‘how fast?’ We’re pretty excited about it and think we’re going to hit it at about the 5 year mark.”