The Army is now working to tie together all of its simulations for combined-arms training to allow for the eventual inclusion of both joint and multi-national partners.

The result of that effort will be called the “synthetic training environment,” or STE, and the Army is now validating its requirements. The STE will be more than just simulation; it will be a live-virtual-constructive architecture that will enable Soldiers at their home installation to don goggles and special gloves to train with allies in virtual “megacities” involving thousands of virtual combatants and miles of complex terrain.

The STE will tie aviation simulators with armor, infantry and Stryker simulations, according to Col. Jay Bullock, TRADOC capabilities manager for the Integrated Training Environment. “We believe STE will revolutionize training,” Bullock said, during a presentation in October at the Washington Convention Center.

Some of the advances may still be years down the road — as the project is just in its infancy. Full implementation of STE may not be completed for a decade or more, but Bullock and his team said the Army is already benefiting from some of the concepts being developed.

“What we’ve been discussing may seem like it’s way out in the future,” said Brig. Gen. Maria Gervais, the Combined Arms Center deputy commanding general for training.

But, she added, it’s closer to reality than some might think.

Technical hurdles
A number of technical hurdles must still be overcome, though, before the full vision of STE can be realized, Gervais said. Perfecting the gaming engine poses one challenge. Interoperability with allies in an open architecture poses another.

Up for consideration in the STE is terrain from Syria, Iraq, the Horn of Africa, Korea and dozens more hot spots across the globe. The ultimate goal is that trainees will be able to don goggles and experience three-dimensional views of those potential battlefields. Soldiers will then be able to fight a virtual battle on the terrain of a commander’s choosing. 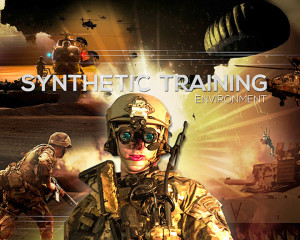 “We have to figure out how do we get that terrain that represents the world — that’s a pretty big task,” Gervais said.

Merging systems
The Army currently has 47 different terrain databases to support 13 legacy systems, Gervais said. These systems were never designed to be interoperable, but that’s the goal of the STE. In the future, these dozen systems will be merged into just one or two.

Until now, simulations have focused primarily on specific vehicle platforms such as a simulator for the Apache helicopter, another for the M1A1 tank, etc. The Synthetic Training Environment will bring all these platforms together for combined-arms training.

“You sit inside of a cockpit that is replicated … you put on a helmet that’s got fisheye lenses that project the virtual image,” said Lt. Gen. Michael Lundy, commander of the Combined Arms Center at Fort Leavenworth, Kansas, describing today’s Aviation Combined Arms Tactical Trainer, or AVCATT.

“You have all these projection screens in there; there are lots of proprietary computers and software and everything else,” he continued. “And it’s in an environmentally-controlled tractor-trailer truck. … There’s about five or six contractors that come with it. It’s got generators. It has power requirements … All of these things drive the cost up, and they’re very, very expensive simulations.”

Whenever the technology in an Army helicopter changes, the software for the simulator must change as well, Lundy said, and that kind of constant reconfiguration is expensive.

For instance, going from a Black Hawk UH-60 L model to an M model required new software for simulation. The engineering software updates were very expensive and time-consuming to implement, Lundy explained.

Right now, the Army can spend six to eight months to replicate software for simulations, and then the programs must then be tested. It might take 18 months just to get the new software in the simulators.

“Well that’s not agile enough,” Lundy said. He would like to have the ability to pull software from an aircraft or vehicle and place it directly into simulators. Currently, proprietary concerns preclude that.

He challenged industry partners: “How do we get simulations to run on native software?”

Saving money
“This is how we can save a lot of money,” Lundy said. “We can go from a tractor-trailer truck to a couple of hardened tough boxes.”

He would also like to see simulators available at the company and battalion levels. “I really want an 11-Bravo to be able to grab this, pull it out — just like he does his iPhone — and be able to use it,” he said.

In the future, STE could save tens of millions of dollars, he said, perhaps even hundreds of millions over the lifecycle of the program. And the technology of today is not just superior, it’s cheaper, Lundy said. Come 2025, the current simulators will be unaffordable to operate and maintain, he believes. 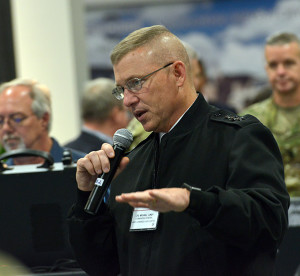 Lt. Gen. Michael Lundy, commander of the Combined Arms Center at Fort Leavenworth, Kansas, describes the Synthetic Training Environment during a presentation at “Warrior’s Corner” presentation during the Association of the U.S. Army Annual Meeting and Exhibition Oct. 4, 2016, at the Washington Convention Center.

“Today we have image generators for some of our simulations that the bulbs cost a thousand dollars, because it’s 80s technology,” he said.

Today’s simulators are also too expensive to allow the Army to train in scale. For instance, right now, a division has only six aviation cockpit simulators. “We need to be doing battalion-level operations, brigade-level operations [with as many simulators as aircraft],” Lundy said.

“We’re interacting right now with virtual entities,” Lundy said, referring to some of the programs currently in development at research centers. “You can actually put your glasses on, you can see them; you can talk to them; they’ll interact with you.”

Currently, this virtual training is geared to the individual level, though. STE must enable brigade combat teams to fight combined arms at the corps level, he said.

Fighting in megacities
Army Chief of Staff Gen. Mark Milley has said that Soldiers in the future must be prepared to fight in megacities, dense metropolitan areas with populations that exceed 10 million people. The only way to train realistically for fighting at scale in a megacity, Lundy believes, is virtually.

In the real world, even if the expansive structure of megacities could be replicated, there’s no way that enough role players could be brought in to make the training realistic.

“We can probably get the physical structure to replicate a megacity,” Gervais said. “But how do you replicate the density of the population that you will encounter? … We believe that through virtual reality, we can actually get to that environment.”

The complexity of megacities is “just the tip of the iceberg,” Gervais said.

“We have to portray the actors and the terrain in every domain the Army is expected to operate, whether that’s cyber, space or the land,” she said.

Way ahead
Many organizations are working together to make STE happen, Lundy said. The Combined Arms Center-Training division and TRADOC capability managers are working on requirements. They represent the users, Lundy said.

The Program Executive Office for Simulation, Training and Instrumentations, or PEO-STRI in Orlando, Florida, is the materiel developer. They have a science and technology lab. Another player is the Institute of Creative Technology in California.

Maneuver Center of Excellence at Fort Benning, Georgia, helps drive the infantry and armor requirement, and for combined arms, all centers of excellence are getting involved, Lundy said. “That’s why this is so complex.”

The Army G-8 and the Office of the Assistant Secretary of the Army for Acquisition, Logistics and Technology or ASA(ALT) serve as the approval authority for requirements and long-range investment strategy.

“General Gervais works with all of them to really bring this collective team, this enterprise together to be able to deliver this capability to the Army,” Lundy said. “The sky’s the limit.”

But there’s one thing STE will never do, according to Garvais.

“In no way, shape or form are we advocating that the synthetic training environment will ever replace live training,” she said. “That will not be the case.”

Instead, she said, STE will enhance live training and enable repetition and allow units to enter a live training event with a much higher level of proficiency.