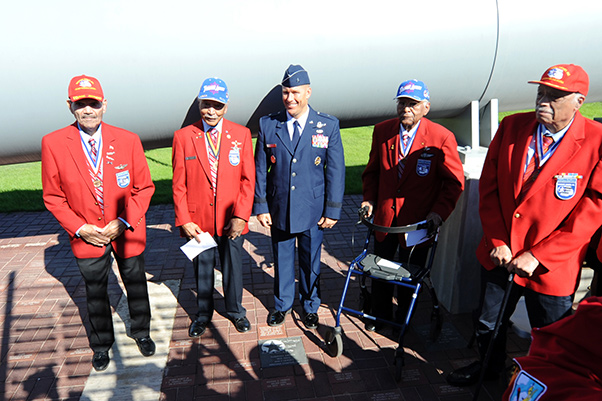 Brig. Gen. Brook Leonard, 56th Fighter Wing commander, stands with members of the Archer-Ragsdale Arizona Chapter Tuskegee Airmen Incorporated, beside the Tuskegee Redtail granite paver Nov. 11, 2016 at the Wesley Bolin Memorial Plaza, Phoenix, Ariz. The granite paver was placed between the gun barrel monuments for the U.S.S Arizona and the USS Missouri gun in memory of the Tuskegee Airmen who served in World War II.

A granite paver was unveiled honoring the World War II Tuskegee Airmen during a Veteran’s Day ceremony Nov. 11, at the Wesley Bolin Memorial Plaza in Phoenix.

The ceremony began with Nate Carr, Archer-Ragsdale Arizona Chapter Tuskegee Airmen Incorporated’s treasurer, briefly explaining the history of the battle for liberty the Tuskegee Airmen had to endure, both overseas and at home.

“More than 1000 Tuskegee pilots received their wings during World War II,” Carr said, “But, for every pilot there are at least 10 Airmen on the ground supporting them. This ceremony today honors more than 15,000 men and women who were a part of the Tuskegee experience.”

The Tuskegee Airmen made up a squadron of mostly African-American pilots who flew the P-51 Mustang. These “Red Tail Angels” flew B-17 bomber escorts during World War II, where they had the lowest casualty rates of bombers being escorted.

“Roughly 300 surviving Tuskegee Airmen received the congressional gold metal on March 29, 2007,” said David Toliver, former ARAC president. “This year has also been important for the Tuskegee Airmen history. Today we will unveil the granite paver between the gun barrel monuments of the USS Arizona and the USS Missouri.”

The Tuskegee Red Tail granite paver is a 40-pound block placed into the ground along with other pavers that memorialize members who’ve served in World War II.

“I always tell people that history makes us smart, but heritage makes us proud,” said Bernard Bruce, 56th FW occupational safety manager and ARAC historian. “Stories live forever but only if you tell them.”