Brig. Gen. Andrew MacDonald took command of the 162nd Wing in a ceremony Nov. 5 at the Tucson International Airport.

Brig. Gen. Howard Purcell relinquished command to MacDonald, who returned to the 162nd Wing after an assignment in Washington, D.C. MacDonald also promoted to brigadier general during the ceremony in front of family members and distinguished guests, as well as more than 1,200 Air National Guardsmen under his command.

“I am humble and proud to wear your stars,” said MacDonald, implying his promotion was the direct result of Airmen underneath him. “I will give you my best. I promise.”

During the ceremony, Purcell offered some parting words to the wing’s new commander. 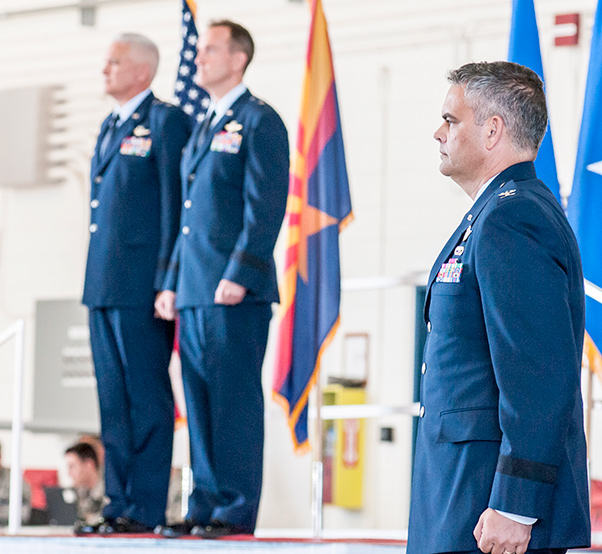 Col. Andrew J. MacDonald stands at attention as he waits to take command of the 162nd Wing, and promotion to the rank of brigadier general at a change of command ceremony in Tucson, Ariz., Nov. 5, 2016. The 162nd Wing honors a military tradition dating back to the 18th Century that represents a format transfer of authority and responsibility for a unit from one commanding officer to another.

“You are about to take part of the most important and rewarding job of your career. The men and women before you are amazing individuals, and together, they make an amazing team,” said Purcell, whose next role will be as chief of staff at the Arizona National Guard headquarters in Phoenix. “Take care of them, and they will take care of the rest. There is nothing out of their reach,” he added.

MacDonald’s military career started as a Marine Corps aviator. He joined the Arizona Air National Guard in 1998. He has served in multiple leadership positions with the 162nd Wing, including as maintenance group commander. His most recent assignment was as executive assistant to recently retired Army Gen. Frank J. Grass, the previous Chief of the National Guard Bureau.

“The key that I saw in General MacDonald was how he came into a new situation at a national level, working with Congress, the White House and the Joint Chiefs of Staff,” said Grass. “He was a natural, and he did it very quickly without any fanfare. But he always remembered where he came from, and what he did would have an impact on the Airmen here.”

“Our wing does those three missions in unbelievable fashion,” he said, referencing the wing’s international pilot training and local partnerships, maintaining the “no-fail” aerospace control alert mission, and the MQ-1 reconnaissance and combat support missions. 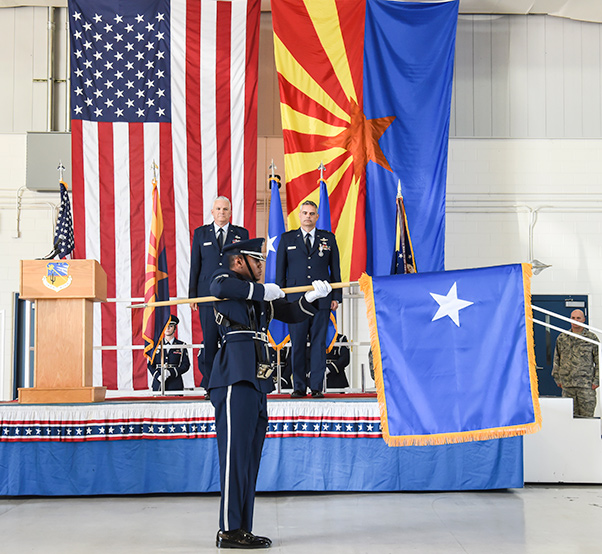 Staff Sgt. Eddie Jones, a member of the 162nd Wing honor guard, unfurls the brigadier general flag at a change of command ceremony at the 162nd Wing in Tucson, Ariz., Nov. 5, 2016. The Air Force incorporates the use of flags to signify the presence of a general officer.

MacDonald pointed to how the historic Minuteman placed in the middle of the contemporary National Guard moniker applies to the mission-focused mindset of the 162nd Wing Airmen.

“You are what makes the mission,” he told his Airmen.

“Way back in 1956 in a small hangar with dirt on the floor and one airplane, General Morris had this vision of the greatness that it is today. He started it, but all the Airmen here have continued it,” he said.

A command pilot with more than 4,400 combined flying hours in the F-16A/C/E, TA-4, T-34C, and EA-6B, MacDonald is a graduate of the State University of New York at Binghamton and of the Naval Post Graduate School, in addition to various correspondence courses from the Air Force and the Marine Corps. 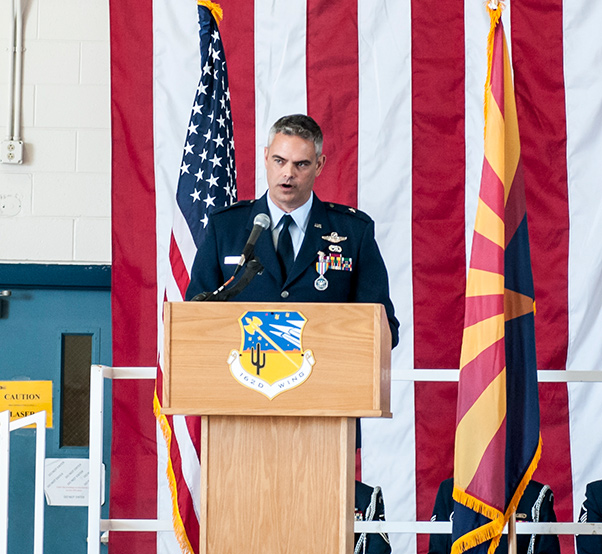 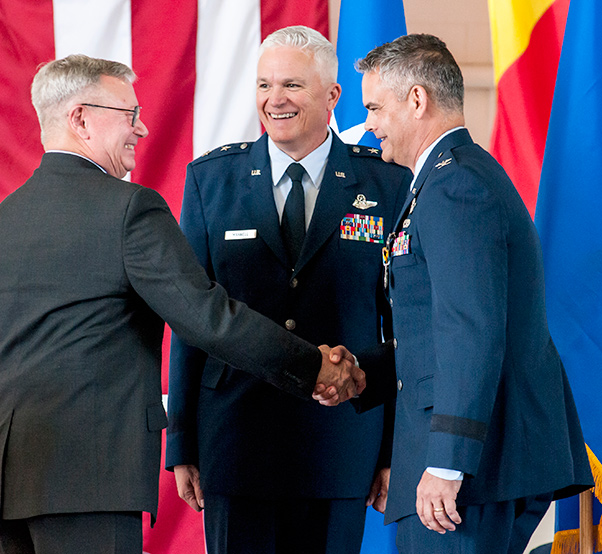