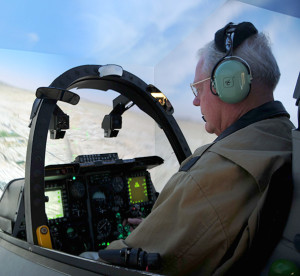 Retired Major General James W. Graves, flies the A-10C Thunderbolt II simulator during the 47th Fighter Squadron alumni visit at Davis-Monthan Air Force Base, Ariz., Dec. 6, 2016. To better understand the unit’s current aircraft, the alums were given the opportunity to sit in the simulator and compete in teams of two. Graves is a former Assistant to the Chairman Joint Chief of Staff for Reserve matters and former 47th FS commander 1996-1997.

On the eve of the 75th anniversary of the attack on Pearl Harbor, the 47th Fighter Squadron gathered their alumni to celebrate the unit’s history Dec. 6-7, 2016.

If you ask any one of the 25 Alumni present, what makes the 47th FS special they are going to say three words, Taylor and Welch.

Second Lt. Kenneth Taylor and George Welch, assigned to then 47th Pursuit Squadron, were the first pilots in the air, without orders, when the Imperial Japanese Navy decided to bomb the U.S. Naval Base at Pearl Harbor.

“The U.S. was able to find a bright light in what was otherwise known as the darkest days of the U.S. military history because of the decisiveness, tenancy, and courage of some notable 47th PS fighter pilots,” said retired Maj. Gen. James W. Graves, a former assistant to the Chairman Joint Chief of Staff for Reserve matters and former 47th FS commander 1996 to 1997.

Working off of an hour and half of sleep Taylor and Welch were woken up by gun-fire and low-flying planes. They quickly redressed in the clothes they were wearing the previous night and drove 10 miles, dodging machine-gun fire and explosions, on their way to the airfield. Once they arrived, they immediately climbed into their Curtiss P-40 B Warhawk fighters and took off. Taylor and Welch are credited with taking down six Japanese aircraft.

With the significant historical background the unit has, many of the members felt as though something should be done to commemorate their incredible heritage.

“We had 25 alumni, with seven of them being former squadron commanders from the 1980s to 2000s,” said Hetland. 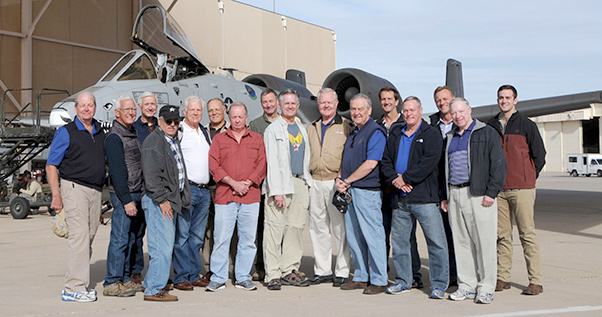 47th Fighter Wing alumni pose for a group photo in front of a A-10C Thunderbolt II at Davis-Monthan Air Force Base, Ariz., Dec. 6, 2016. The alums were invited back to the unit to commemorate the 75th anniversary of the attack on Pearl Harbor where the 47th FS were the first to get into the air and are credited with taking down six enemy aircraft.

During their three-day visit the veteran’s received a tour of the squadron and the A-10C Thunderbolt II. They learned about the technological updates and how they contribute in recent combat missions, and they also participated in a friendly competition in the A-10C.

“Many of [the alum] last flew the A10A [model] before iron sights or GPS so during this visit they learned all about the capabilities of the A-10C,” said Hetland.

To better understand the aircraft the alums had to opportunity to sit in the simulator and compete in teams of two. They had to take out ground targets while defending their positions in the air.

“I was able to wrestle the A-10C,” said Graves. “The systems and switches are very different but what I chose to do was to keep it simple. I used the system that has defined the airframe from its production, the gun.”

The alums were thankful for the open welcome they received when they returned to the unit.

“The best part of the reunion was reconnecting with old friends and make new one,” said Graves. “The 47th has a very proud heritage and it’s great to see the legacy continue.”