Marcus Foiles beamed with excitement as he piloted an A-10 in the skies over a virtual southern Arizona landscape.

Foiles had been in a flight simulator before, but today was a whole new experience. The odds of him sitting where he was at that moment in time were immeasurable.

The last time Foiles held the simulator’s control stick was when he was 10-years old, after being diagnosed with leukemia. Davis-Monthan rolled out the red carpet for the young boy from Springfield, Ill., who was granted a tour of the Aerospace Maintenance and Regeneration Center with sponsorship from the Make-A-Wish Foundation.

“As far as I knew, we were going to pull in to a lot full of airplanes and that would be it,” Foiles said. “Instead, we come through the front gate [with] the honor guard there and that’s where I met Gregg.”

In 1989, then-Air Force Capt. Gregg Montijo, was an A-10 instructor pilot who volunteered for an additional duty as a tour guide at the AMARC. With the help of other agencies on base, Montijo was able to give the Make-A-Wish recipient an exclusive tour of D-M and his very own flight suit

Two merged photographs present Marcus Foiles and retired U.S. Air Force Lt. Col. Gregg Montijo in an A-10 flight simulator during a tour at Davis-Monthan Air Force Base, Ariz., Jan. 27, 2017 (left), and July 1989 (right). Foiles was 10 years old in 1989 when he was granted a trip to D-M via the Make-A-Wish Foundation after being diagnosed with leukemia. Foiles made the trip back to D-M to reconnect with Montijo, the pilot who hosted the tour 28 years ago.

“Getting to work one-on-one with someone was kind of a unique experience at the time,” said now-retired Air Force Lt. Col. Gregg Montijo. “They could have just simply showed [him] the boneyard but it became a special day.”

In 2016, Foiles had the idea to reconnect with some of the friends he made during his trip to D-M. He was able to find Montijo’s contact information, so he decided to send him an email. Attached to the email was a weathered newspaper clipping of Foiles and Montijo behind the controls of an A-10 simulator during the visit in 1989.

“I see the name and there’s something in the back of my brain going, ‘I know this name, it’s ringing a bell, it’s tied to my past somewhere,’” Montijo said. “I clicked on it and it had the picture [that] brought back a lot of memories.”

On Jan. 27, 2017, Foiles and his wife Melanie made the trip back to D-M to reconnect with Montijo, take another spin in the A-10 simulator, and have a quick look at an A-10 on the flight line.

“Just to get caught up with him was awesome, and for the rest of this to be possible is exceeding expectations,” Foiles said.
The A-10 simulator that Foiles flew this time around was generations ahead of the one in 1989.

“I was in awe at the fact that you can go and sit inside the cockpit, close the doors behind you and have 360 degree viewing night or day, was just amazing,” Foiles said. “The controls are the way that they would be if you were on the aircraft; it was definitely a rush.”

During the visit, Foiles and Montijo shared an easy rapport as if they had just seen each other yesterday. 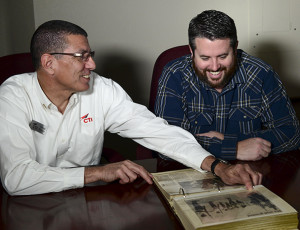 “It was like finding an old, long lost friend,” Montijo said. “It’s a part of my life that has now come full circle. It’s been a little bit emotional to have someone from your former life come back.”

Foiles brought along a photo album that his mother put together from the original trip. The book contained photos of the tour, old newspaper clippings, and a running commentary written by his mother in the margins.

Foiles endured a total of two and a half years in chemotherapy, one of which followed the trip in 1989. But his visit to D-M provided him with memories he could reflect on for a lifetime.

“I would get [the photo album] out every once in a while as a kid and look through it,” Foiles said. “There was never a time when I could look through that book and not have a smile on my face. I know I really did something special.”

Tucson to be home to new Raytheon missiles/defense unit