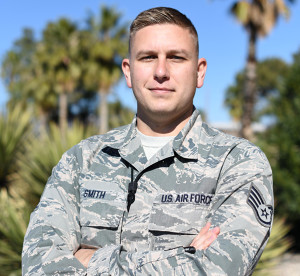 Many people would see a car accident and drive on by; but not Staff Sgt. Devin Smith, a Citizen Airman from Fort Worth, Texas, who apparently has a “knack” for being in the wrong place at the right time.

Such was the case Jan. 19 when he was driving behind a 16-year-old girl named Aspen Ballesteros who hit the gravel shoulder, over corrected, and flipped her truck – right in the middle of rush-hour traffic, going 55-60 mph. Instead of driving by, this command post controller stopped to help.
“I stopped instinctively,” he said. Having worked in law enforcement before, this wasn’t the first time he’s been on the scene of a wreck – it was actually the third or fourth time he responded to a rollover.

“I was right behind her, so I was the first to the truck,” said Smith. “I had her shut the engine off so nothing would continue to run, get hot, or leak. She was disoriented but conscious, and … I was able to look through the back window of the truck to see if there was anyone else in there.”

Several other Good Samaritans had stopped to help as well, within just a few minutes. One man who worked for a local cable company had a fire extinguisher so he grabbed it and put out a small grass fire that was just catching underneath the vehicle.

“Thankfully, she wasn’t hurt or injured, bleeding – but the truck was resting on the passenger side so her door would have opened upward. One guy held it open and we told her to brace herself before taking off her seatbelt so she wouldn’t fall. We helped her climb out and set her down away from roadway to wait for EMS.”

Around that time, a woman stopped and let them know she was a nurse. She made sure Aspen was ok and called her dad, retired Master Sgt. Ron Ballesteros, who had been trying unsuccessfully to reach Aspen by cell. He was relieved to know there was a community of selfless givers who had surrounded his daughter, and he immediately jumped into his car and raced to the scene. When he saw the hole a boulder had torn in the top of the truck, he said he recognized that God had a hand of protection on his daughter.

“We can’t explain how else she was unharmed,” he said.

He and Smith have since exchanged a few text messages since the incident, discovering their mutual faith. Smith – who attended Bible college prior to joining the Air Force – is just glad Aspen was ok. His humility and calm demeanor, though rare, are exactly what any parent would hope for in someone rendering aid, Ballesteros said.

“I wasn’t by myself pulling her from a burning vehicle,” said Smith, himself a dad of two young children. “A bunch of other people stopped and lots were willing to render aid.”

Ballesteros had a different perspective.

“Most people who passed by got their cell phones out,” said Ballesteros. “They were more interested in getting photos and video than helping. Devin’s reaction was quick; he didn’t give regard to his own safety and he didn’t know what condition my daughter was in when he acted.”

Aspen was transported to a local hospital’s emergency room and released less than an hour later. She was sore from the impact, but Ballesteros attributes her safety to her ongoing athleticism as a gymnast as well as the protective hand of God and the fact she was wearing her seatbelt.