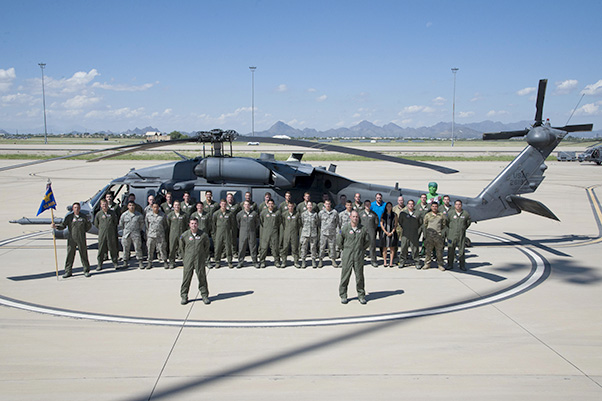 Airmen form the 55th Rescue Squadron pose for a group photo in front of an HH-60G Pave Hawk at Davis-Monthan Air Force Base, Ariz., Sept. 21, 2016. The 55th RQS operates out of D-M but falls under the 23d Wing headquartered at Moody AFB, Ga.

Combat search and rescue plays a major role in the mission set of Davis-Monthan Air Force Base, Ariz.

The mission of the 55th RQS is to rapidly deploy highly survivable CSAR forces to theater commanders. They employ the HH-60G and pararescue forces in hostile environments during day, night and adverse weather conditions with the ability to provide close-air support. The squadron is made up of approximately 70 personnel assigned to six career fields. It conducts operations outside of wartime to include disaster relief, counterdrug operations and non-combatant or medical evacuation.

“We are tasked globally and within the United States to provide either combat search and rescue or search and rescue capabilities to combatant commanders,” said Lt. Col. Paul Sheets, 55th RQS commander. “That mission is to go out there and bring isolated personnel from the battlefield, or even a bad environment here in the U.S., back home.” 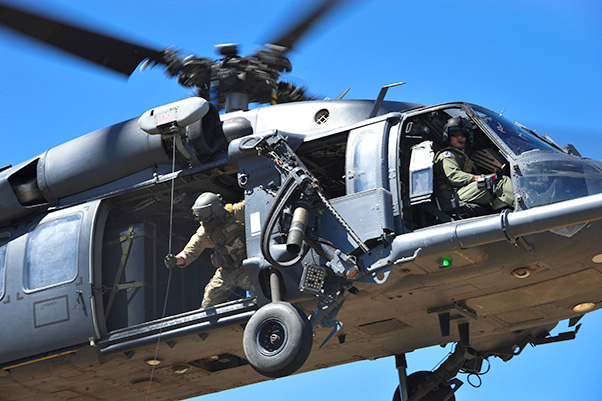 Members from the 55th Rescue Squadron hoist a simulated down pilot off the ground into an HH-60G Pave Hawk during a search and rescue exercise at Outlaw/Jackal military operations area in southeastern Ariz., Sept. 15, 2016. During the exercise, rescue assets remained in constant communication with the downed pilot to execute a successful extraction.

The Air Force is the only service that provides dedicated combat search and rescue assets to theater environments, according to Sheets. Aside from the CSAR mission, the unit has also supported six local rescue missions over the past two years.

“Our main focus is combat and that is what we train for every day, but we do provide, and we have on multiple occasions, local search and rescue support,” Sheets said.  “We only get called if there is a very unique mission that requires our specialty.” 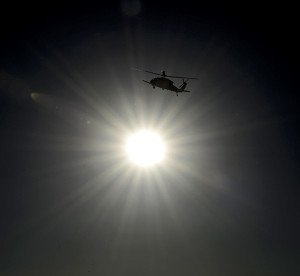 On July 18, 2016, the 55th RQS recovered six hikers in Coconino National Forest by request of the Coconino County Sherriff. After recovering all six hikers using a 120-foot hoist, they transported the individuals to the incident command post where they were taken to a hospital. The Pima County Sherriff Department also requested the squadron’s assistance on Sept. 7, 2016. The rescue of two hikers, one injured, took place at night in marginal weather conditions at Pusch Ridge located north of Tucson, Arizona. Once the hikers were recovered, the 55th RQS transported them to a nearby soccer field where care was transferred to local agencies.

”Few units execute this critical mission and we take this responsibility of combat search and rescue very seriously,” Sheets said. “Every day we train or execute the mission of recovering personnel where no one else can go.  We train in ways to ensure we are the best at this mission and we will not fail.”

Editor’s note: This story is part of the “55th RQS series” which highlights the different AFSCs associated with the unit.