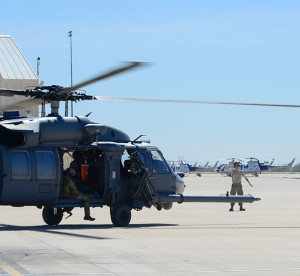 Senior Airman Aaron Diver, 55th Helicopter Maintenance Unit HH-60G maintenance journeyman, marshals an HH-60G Pave Hawk for takeoff at Davis-Monthan Air Force Base, Ariz., March 8, 2017. The 55th HMU is under the 923d Aircraft Maintenance Squadron and operates 24/7 to make sure the aircraft are ready to fly for any mission.

The 55th Rescue Squadron at Davis-Monthan Air Force Base, Ariz., conducts training missions on a regular basis, but when the HH-60G Pave Hawk is grounded, a completely different crew handles the aircraft.

The 55th Helicopter Maintenance Unit, under the 923d Aircraft Maintenance Squadron, operates 24/7 to make sure the aircraft are ready to fly for scheduled missions and if needed, unscheduled local rescue missions.

“We have to provide aircraft to the 55th RQS while doing our maintenance efficiently and safely,” said Staff Sgt. Jose Perez, 55th HMU flying crew chief. “So much goes into our maintenance that requires us to keep our head on a swivel, as to not jeopardize what could be someone’s worst day of their life.”

The 55th HMU is responsible for ensuring the rapid mobilization of the HH-60G and the maintenance forces supporting combat and peacetime search and rescue operations.

The unit is comprised of 137 personnel and maintains nine helicopters. The HH-60G is a modified version of the U.S. Army UH-60 Blackhawk. Some of the upgraded features include satellite communication, Doppler navigation and global positioning systems.

“PAVE stands for Precision Avionic Vectoring Equipment,” Evers said. “It’s all of the extra avionics equipment such as guidance and controls, color weather radar and personnel locating equipment.  These are things that separate our aircraft from what a Blackhawk would do.” 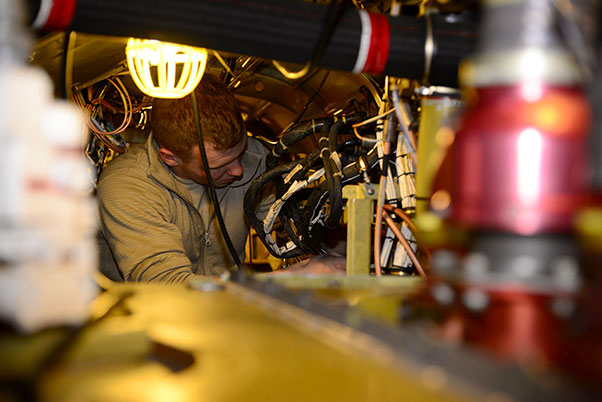 Staff Sgt. Joseph Drees, 55th Helicopter Maintenance Unit communication, navigation and mission systems journeyman, connects a grounding wire in an HH-60G Pave Hawk during a phase inspection at Davis-Monthan Air Force Base, Ariz., March 8, 2017. A phase inspection is a complete teardown of the aircraft parts to check for any cracks or discrepancies.

When an unscheduled or local rescue mission comes down, everyone on shift gives their all to make sure the aircraft are ready to go at a moment’s notice.

“Everyone is trying to do something,” Perez said. “There isn’t a single soul that is sitting down, in a chair or at a table not doing anything to better the situation.”

Although every unit may have last minute missions, the mindset in search and rescue is completely different than any other mission.

“There is a greater sense of urgency when something like that happens because we all know there are lives on line,” Evers said. “I first cut my teeth on maintenance working in special operations and I came to rescue after that. It’s different on those airframes because they have redundant systems, but on the Pave Hawk we don’t have that. There is a single radio for each type and singular equipment so if something goes down it reduces the mission capability and it makes us less effective to pull these people out of the bad situation they are in.” 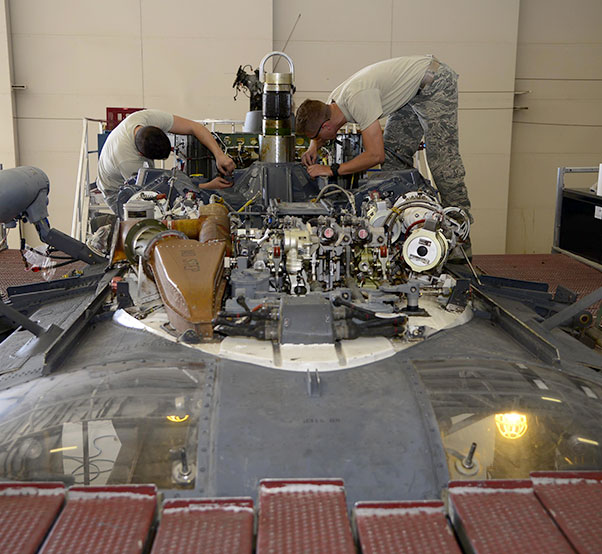 In emergency situations, there is a time known as the “Golden Hour.” This term refers to the hour immediately following a serious injury and is the period of time that is most critical to a patient’s survival. Since their mission is to ensure the 55th RQS can get off the ground with pararescuemen, the unit can have a helicopter ready to fly in 10 minutes, according to Perez.

“Everything we do, we try to make sure we are doing it the right way the first time so we don’t have to come back later — it could adversely affect whether or not someone lives or dies.”