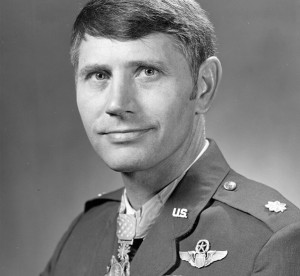 SIOUX FALLS, S.D. (AP) _ Retired Air Force Col. Leo K. Thorsness, a highly decorated Vietnam War pilot who was shot down and held for six years at the notorious “Hanoi Hilton” prisoner camp, where he shared a cell with U.S. Sen. John McCain, has died. He was 85.

The Medal of Honor recipient, who also ran for Congress in South Dakota and served as a legislator in Washington state, died May 2, according to the Congressional Medal of Honor Society. His cause of death wasn’t disclosed.

McCain, also a downed pilot during the war, released a statement calling Thorsness a dear friend.

“One of the greatest honors of my life was serving with Leo, a man whose service exemplified selfless duty and devotion to others,” the Arizona senator said.

In April 1967, Thorsness was piloting an F-105 fighter-bomber and attacking surface-to-air missile sites over North Vietnam when a plane in his group was shot down. Thorsness circled the descending parachutes to relay the two downed crew members’ positions to search teams.

He attacked an enemy plane before leaving the area in search of fuel. But when he heard enemy planes were threatening search helicopters, Thorsness — despite his low fuel — returned and attacked, driving enemy planes from the rescue scene. When he was about to refuel from an airborne tanker, he learned another F-105 in his group was lower on fuel, and he allowed the other plane to refuel first, according to the society.

Thorsness was awarded the Medal of Honor — the military’s highest award for valor — for the mission years later.

Less than two weeks after that mission, Thorsness was shot down and taken prisoner in North Vietnam. He was held at the notorious POW camp where captives were routinely beaten and tortured. McCain, also a downed pilot, was held at the same prison.

“Leo would spend the next six years imprisoned, including a full year in solitary confinement, and endure unspeakable pain and suffering because of his steadfast adherence to our code of conduct,” McCain said. “But Leo never let this experience break his spirit, and inspired the rest of us with his patriotism, perseverance, and hope that we would someday be free.” 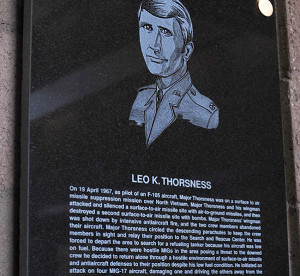 A plaque is dedicated to retired Air Force Lt. Col. Leo K. Thorsness in the 355th Fighter Wing headquarters building, named Leo K. Thorsness Hall, at Davis-Monthan Air Force Base, Ariz., May 4, 2017. Thorsness, one of 12 Vietnam-era Air Force members to receive the Medal of Honor, died May 2 in Jacksonville, Fla., at the age of 85.

The Minnesota native enrolled at South Dakota State University, where he met his wife, Gaylee, in 1950, and he enlisted in the military the following year. He eventually returned to South Dakota, where he was the 1974 Republican nominee for U.S. Senate.

Thorsness later moved to the Seattle area, where he was elected in 1988 as a legislator in Washington state. Thorsness also spent time in California and other states, and eventually moved to Florida.

“I considered him a patriot,” friend and former campaign volunteer Carol Twedt told the Argus Leader newspaper in Sioux Falls, S.D. “His passion for politics was that he wanted to make the world a better place to live.”

Along with his wife, Thorsness’s survivors include a daughter, Dawn Thorsness; a sister, Donna Martinson; and two grandchildren.