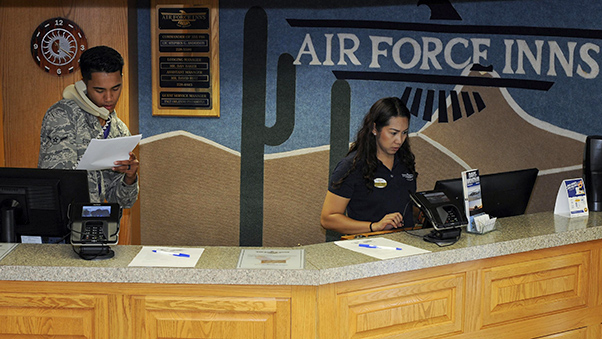 The Air Force Inns at Davis-Monthan Air Force Base, Ariz., will be evaluated starting June 8, 2017, for the annual Innkeeper Award.

The award program encourages innkeepers to improve their management and operation of lodging facilities at the 95 major Air Force bases worldwide. The completing bases are separated into two categories, large or small based on lodging size.

“Out of 40 large Air Force Inns in the U.S. Air Force only four were selected and we are one of them,” said Senior Airman Joel Turner, 355th Force Support Squadron guest service representative.

“We treat our guests with pride ensuring they have a wonderful stay here,” Turner said.

The Inns are judged on Air Force lodging standards, customer feedback surveys and in-person evaluations of the Inns.

“Personally it is a validation of the hard work of the people of this operation do day-in-and-day-out,” said Daniel Baker, 355th FSS lodging general manager. “It’s that recognition for taking care of our customers to the best of our ability every day.”

The evaluation team arrives on June 7th and will depart June 10th.