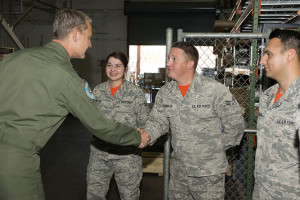 Commander of the Royal Netherlands Air Force Lt. Gen. Dennis Luyt, visited the Logistics Readiness Squadron during his visit to the 162nd Wing June 16, 2017. Airmen from LRS store and ship more than 10,000 supplies in support of the Dutch 148th Fighter Squadron. Luyt spent the day visiting with Airmen and the evening attending a graduation for his newest fighter pilots.

Lt. Gen. Dennis Luyt, the commander of the Royal Netherlands Air Force, spent the day visiting Airmen at the Arizona Air National Guard’s 162nd Wing located at the Tucson International Airport and the evening attending a graduation for his newest fighter pilots June 16, 2017.

Luyt started his visit by getting an up close look at the missions of the 162nd, including riding in one of his own F-16 Fighting Falcons with the 148th Fighter Squadron.  His sky high view offered him the best seat in town to witness his pilots in action.

“I have enjoyed 25 straight years of flying fighters.  Flying in the F-16 although it was in the backseat it reminded me what a fantastic job it is and what a fantastic time I had,” Luyt said.

Dutch pilots were the first in a long line of international students to ever train with the 162nd Wing. Starting in 1989, they were a mainstay group at the unit for 18 years until they moved to Springfield, Ohio, for a five-year agreement to train with the Ohio Air National Guard’s 178th Fighter Wing.

They returned to the 162nd in 2011 and currently have 10 of their own jets here.  The pilots participate in basic as well as advance courses and average about 2,000 flying hours per year.

“We can’t do this job ourselves,” said Lt. Col. “Niki” Luijsterburg, commander of the 148th Fighter Squadron. “We have an entire support system with the 162nd where everything that we need to operate and obviously the maintenance organization that is behind it, we are taken care of.  A U.S. organization maintaining Dutch jets with Dutch and American pilots is a great partnership.” 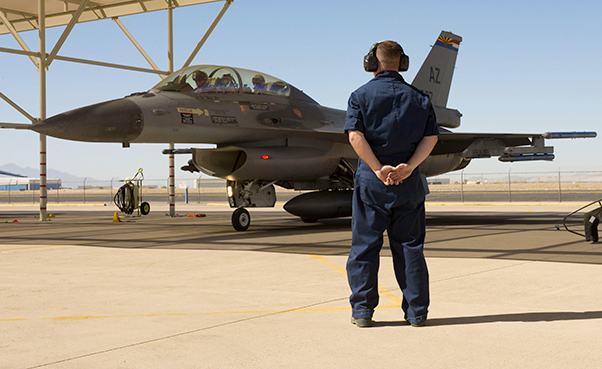 Commander of the Royal Netherlands Air Force Lt. Gen. Dennis Luyt, got an up close look at the missions of the 162nd from the backseat of one of his own F-16 Fighting Falcons with the 148th Fighter Squadron. He spent the day visiting with Airmen and the evening attending a graduation for his newest fighter pilots June 16, 2017.

The RNLAF training program is supported by the International Military Student Office personnel before the student pilots step foot in Tucson, the Logistics Readiness Squadron receives, stores and ships more than 10,000 supplies annually.

The Dutch rely on some of the most skilled maintainers in the world.  The 162nd Maintenance Group’s personnel average more than 14 years of experience and the 148th Aircraft Maintenance Unit is dedicated to keeping Dutch jets in top shape to support the country’s training mission.

Luyt took the opportunity during his visit to meet with personnel from each support team to learn about their support to his program and thank them personally for what they do.

The formal graduation ceremony was the highlight of his visit.  A chance for Luyt to witness four of his newest fighter pilots graduate after a tough course.  As the keynote speaker, he recognized their hard work and dedication.

“Tonight it is all about you, the training program was certainly not easy,” he said speaking to the graduates.  “You have shown to be the best of the best.”

He went on to remind the graduates that their responsibilities did not end at close of the course, but that they must continually learn and progress in order to become an integral part of the fighting force they have entered.

In closing, he referenced once more his central theme and recognized the 162nd Wing’s contribution to the RNLAF team.

Luyt said, “I would like to congratulate the 162nd Wing in graduating these new fine fighter pilots.  As the Dutch air force we are very proud to be a part of this wonderful team that your wing represents.”