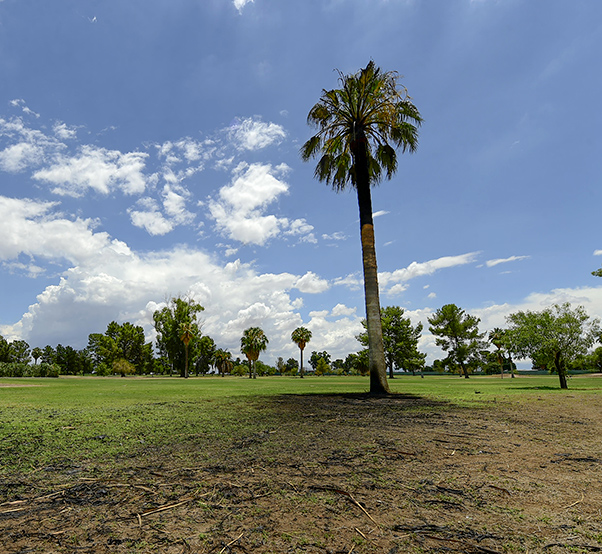 Scorch marks litter the earth around a palm tree after it was struck by lightning the night before at the General William Blanchard Golf Course at Davis-Monthan Air Force Base, Ariz., July 16, 2017. The lightning struck the tree adjacent to the green area on the golf course’s first hole.

Firefighters responded to a fire that was the result of a lightning strike at General William Blanchard Golf Course at Davis-Monthan Air Force Base, Ariz., July 15.

At approximately 11 p.m., the lightning struck a palm tree adjacent to the green area on the golf course’s first hole.

The blaze lit up the backyards of those living on the southeast corner of Commanders Circle.

“My wife is the one who recognized that the strike set the tree on fire,” said Col. Scott Campbell, 355th Fighter Wing commander. “The tree was fully engulfed and had flaming debris falling from it when the firefighters arrived. They had it out in just a few minutes.”

The fire caused minimal damage, only leaving scorch marks to the palm tree and a portion of its immediate surrounding area.