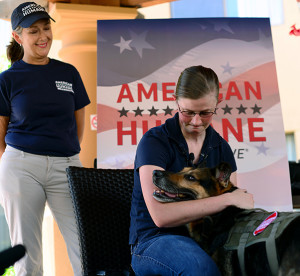 After nearly a year apart, it was an emotional moment when Staff Sgt. Amanda Cubbage, 355th Security Forces Squadron member at Davis-Monthan Air Force Base, Ariz. and prior military working dog handler, was reunited with her MWD, Rick, Aug. 8, 2017.

Rick was flown into Tucson, Ariz., from Osan Air Base, South Korea, after a lengthy adoption process.

“It’s (like) getting part of your heart back,” Cubbage said.

The pair served at Osan AB together for 11 months. On duty, they conducted exercises, and bomb threat and security checks. Off duty, they were each other’s wingman.

As a MWD handler, Cubbage has worked with several other dogs, and described parting ways as bittersweet.

“It’s just like having a kid moving off and going to college,” Cubbage said. “You still love your kid, it’s just the fact that they’re growing up, they’re going out, and they’re doing other things.”

Rick was different than the others, Cubbage said. He instantly won her over with his headstrong personality. 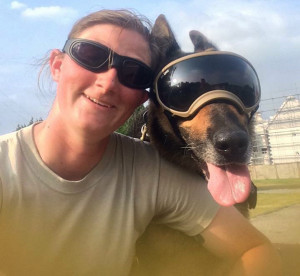 Staff Sgt. Amanda Cubbage, 355th Security Forces Squadron member, poses for a photo with her military working dog, Rick, while assigned to Osan Air Base. Cubbage was able to adopt Rick after he was retired due to old age.

After seven years of service, Rick was retired due to old age. Cubbage found out about the opportunity to adopt retired MWDs from a fellow handler.

“And that’s when I reached out to the American Humane society,” Cubbage said. “They said ‘Absolutely, we’d love to help out.’”

MWDs are allowed to be adopted after retirement due to “Robby’s Law,” which was passed by Congress in 2000.

The adoption process can be long and drawn out, involving tedious paperwork, immunizations, and in Rick’s case, crossing the Pacific Ocean.

Now that he is finally reunited with his companion, Rick will live a quiet and retired life, filled with rest and relaxation, and plenty of treats.