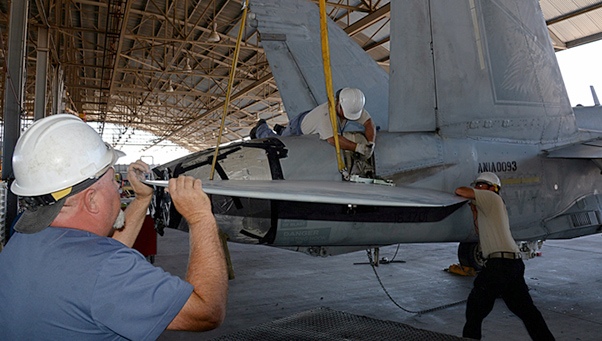 Mechanics with the 309th Aerospace Maintenance and Regeneration Group work to remove a stabilator from an F/A-18C Hornet at Davis-Monthan AFB, Ariz., on June 6, 2016, in preparation for the aircraft to be transported to a Boeing maintenance facility at Cecil Airport in Jacksonville, Fla.

Tucson’s 309th Aerospace Maintenance and Regeneration Group, commonly referred to as AMARG, recently completed a project to withdraw 23 F/A-18C “Hornet” jet fighters from war-reserve storage and deliver them to the U.S. Marine Corps for return to flying service.

Using continuous process improvement, termed “Art of the Possible,” the AMARG team dramatically reduced the time to deliver each aircraft, completing the project for the Marine Corps one year ahead of schedule.

AMARG accomplishes requirements of this kind regularly on behalf of the Department of Defense, several U.S. government organizations (including the U.S. Coast Guard and the U.S. Forest Service among others) as well as U.S. allies worldwide.

The Navy/Marine Corps requirement called for nine aircraft to be delivered in 2016; another seven in 2017; and the final seven in 2018. 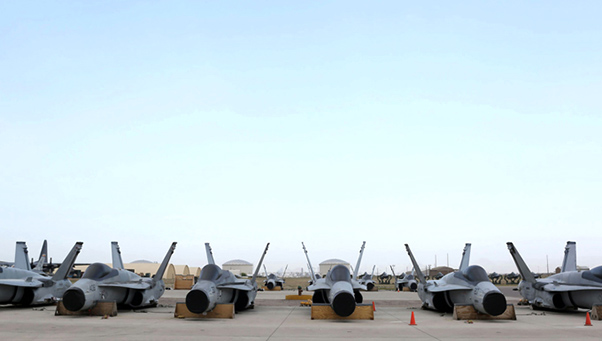 Six F/A-18C Hornets sit on the ramp at 309th Aircraft Maintenance and Regneration Group at Davis-Monthan AFB, Ariz., in preparation for transport to Boeing’s maintenance facility at Cecil Airport in Jacksonville, Fla.

Showcasing AMARG’s resolve to reduce customer costs and increase throughput while maintaining high quality, the aircraft withdrawal team, working within the “Art of the Possible” framework, reduced the number of production hours spent on each aircraft by half.

“With an acceleration of the Hornet production line and a schedule to deliver only seven aircraft in 2017, we had the momentum and opportunity to introduce additional jets originally scheduled for completion in 2018,” said Timothy Gray, AMARG’s acting director at the time of completion. “Doing that required additional Navy funding for this year.”

AMARG presented the opportunity for early project completion during a visit by the Deputy Secretary of Defense. The Navy took advantage of the opportunity, provided the required funding, and “we pressed forward with an accelerated schedule,” said Gray.

By combining Hornet requirements spanning 2017 and 2018 into a single year, the AMARG team doubled their efforts on behalf of Marine Corps warfighters and finished dismantling and preparing the remaining 14 aircraft for shipment by late July, a year ahead of schedule. 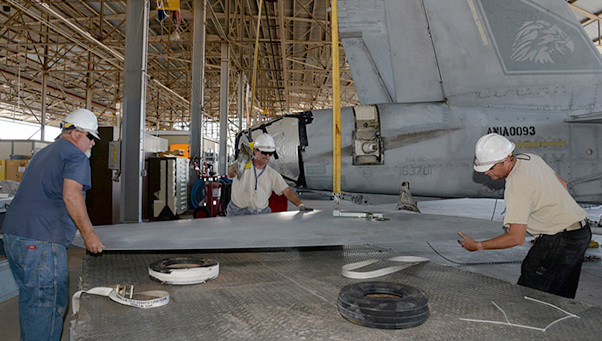 Mechanics with the 309th Aerospace Maintenance and Regeneration Group carefully place a removed stabilator from an F/A-18C Hornet at Davis-Monthan AFB, Ariz., on June 6, 2016, onto a transport cart as part of the preparation to transport the aircraft to a Boeing maintenance facility at Cecil Airport, Jacksonville, Fla.

A total of 16 Hornets were shipped to the maintenance facility at Cecil Airport in Jacksonville, Fla., where Boeing, under a U.S. Marine Corps contract, is installing the F/A-18C-plus upgrade.

Another seven air frames are staged and on stand-by for transport to the Florida-based modernization facility.

This monumental effort is yet another example of how the 309th AMARG helps AFSC provide combat airpower to the war fighter as America’s Airpower Reservoir!

Around the Air Force: May 9