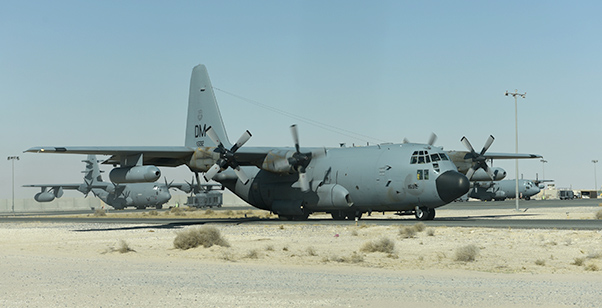 Often times when we think about how air power is used in the fight against ISIS, we think about cargo aircraft delivering critical supplies and personnel to the frontlines or bombs being dropped onto targets.

What’s not often thought of is how the Air Force has the non-kinetic ability to disrupt enemy communications on the ground and therefore the ability to turn the tables on the battlefield.

The 386th Air Expeditionary Wing has the capability to deliver decisive airpower not only through its C-130 airlift mission but through the highly sought after non-kinetic ability of the EC-130H Compass Call aircraft operated by the 43rd Expeditionary Electronic Combat Squadron. These heavily modified airframes are responsible for a highly specialized, unique mission; electronic warfare.

“The mission of the 43rd EECS is to deliver precision electronic attack effects to deny or degrade enemy command and control, protect friendly forces and to achieve the combatant commander’s objectives to defeat our adversaries anytime, anywhere in the joint operations area,” said Capt. Joshua, an EC-130 electronic warfare officer with the 43rd EECS.

“All military operations, to include those of our adversaries, require clear lines of communication between commanders and their forces. When we deny, disrupt or degrade these lines of communications, we reduce the adversary’s battlefield effectiveness and give friendly forces a decisive advantage in individual engagements.”

EC-130H crews are currently performing tactical command, control and communications countermeasures in support of U.S. and Coalition forces throughout the U.S. Air Forces Central Command area of responsibility from the massive re-taking of Mosul to smaller, single-event missions, said Joshua.

“Compass Call is the Air Force’s premier electronic attack platform,” said Cunningham. “It is the CFACC’s only autonomous communications jamming, electronic attack asset. This unique autonomy is attributed to a crew of about a dozen highly-specialized, competent Airmen.”

The EC-130H’s flight deck personnel responsible for the aircraft flight and navigation are the same as found in most C-130 variants. In the back of the aircraft, however, are a number of linguists actively monitoring ISIS communications, while electronic warfare officers simultaneously employ the Compass Call’s electronic attack weapons system.

Because the EC-130H aircraft requires unique and specialized maintenance support to keep the aircraft and weapon systems mission ready, maintainer airmen from Davis-Monthan Air Force Base, Ariz., deploy with the Compass Call aircraft and aircrews.

“Operations and maintenance work together at home station and we fight together in support of Combined Joint Task Force-Operation Inherent Resolve,” said Cunningham. “They are a valued and integral part of our 43rd EECS team. We do not fly our mission without our maintainers’ dedication and effort.”

This non-kinetic capability allows the Air Force to reshape the combat environment by injecting unforeseeable command and control challenges on adversaries and dominating the electromagnetic spectrum, which in turn, enables joint and Coalition military forces to seize initiative and dominate the battlefield.