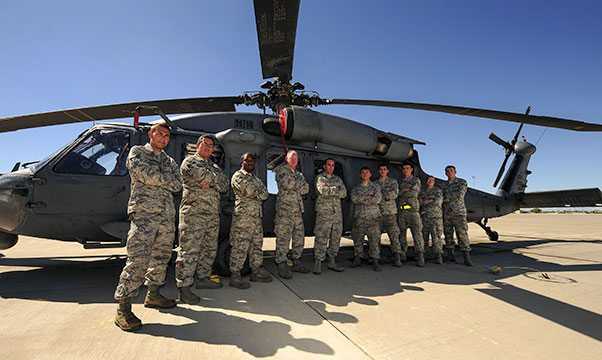 Airmen from the 55th Helicopter Maintenance Unit pose in front of an HH-60G Pave Hawk at Davis-Monthan Air Force Base, Ariz., Sept. 21, 2017. The 55th HMU performed an engine swap on mountainous terrain in less than 48 hours after an in-flight emergency.

High above the desert mountains, an HH-60G Pave Hawk glided through the evening air.

What was supposed to be a standard maneuvering exercise turned into an inflight emergency when the helicopter suffered a detrimental bird strike.

“The impact was enough for the pilots to decide to land the aircraft as soon as possible and see what was going on,” said Tech. Sgt. Jason Lesieur, 55th Helicopter Maintenance Unit flightline expeditor at Davis-Monthan Air Force Base, Ariz. “From there, we got a call saying that the aircraft had landed out in the middle of nowhere on the side of a mountain.”

When the coordinates of the aircraft were received, mid shift maintainers loaded the supplies needed for the job into trucks and rushed off to the landing zone.

It took the crew two hours to get close to the site, but because of the nature of the landing, the rest of the journey had to be made on foot. The Airmen grabbed their gear and trekked for one mile through a mountainous terrain.

“The guys were sent out to initially see what was wrong with the motor,” Lesieur said. “They found out the blades on the interior of the motor were damaged and a new engine needed to be installed.” 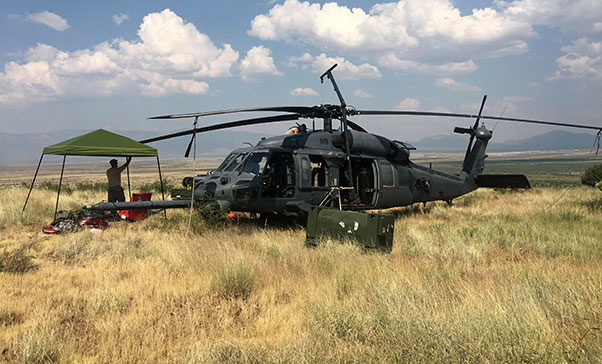 U.S. Air Force HH-60G Pave Hawk awaits a new engine after an emergency landing near a mountain in central Arizona Sept. 6, 2017. Maintainers from the 55th Helicopter Maintenance Unit at Davis -Monthan Air Force Base, Ariz., arrived at the landing site and performed an engine swap in less than 48 hours.

After hours of examining the helicopter and scoping out the area for future teams, the mid shift crew was met by two HH-60Gs. The day shift team arrived and brought with them the engine that would replace the damaged unit in the helicopter.

“We ended up determining that we were not going to be able to get a ground vehicle into the area,” said Tech. Sgt. Jesse Rivas, 55th HMU lead tech for crew chiefs. “We decided to airship the replacement engine and maintenance crane, along with the six personnel chosen for the swap, to the site.”

Once the day team relieved the mid shift crew maintainers, the day team began to unload the replacement engine. Because the swap was being done with limited equipment, the engine had to be lifted out of the helicopter by hand. 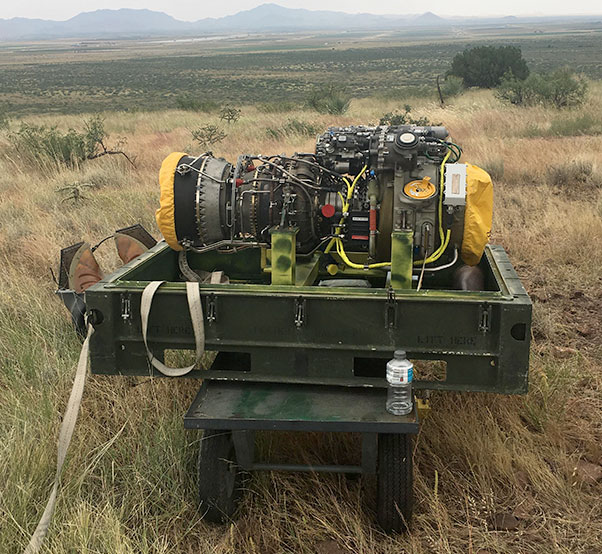 A new HH-60G Pave Hawk engine awaits transport to a damaged helicopter in central Ariz., Sept. 6, 2017. It required six Airmen from the 55th Helicopter Maintenance Unit to load the more than 500 lb. engine onto the cart.

“It took all six of us to download the engine onto a cart,” said Senior Airman Casey Lafond, 55th HMU helicopter crew chief. “Once we loaded it up, we had to transport it across a rocky landscape to the aircraft, which was about 15 ft. away.”

After setting up the crane used for the exchange, the determined crew immediately got to work and swapped out the engines.

After the day team’s shift was over, another HH-60G arrived with the swing shift crew. After passing off the information needed to complete the job, the day team flew back to the base. Shortly after, the engine was successfully installed and the helicopter was ready to return home to D-M.

The 55th HMU team members successfully completed an engine swap in a mountainous landscape in less than 48 hours, a feat that is not easily accomplished.

“These are the kind of moments that make you proud,” Rivas said. “Knowing that these guys have the knowledge, capability and will to do this and sustain it and make it happen lives up to our motto — ‘These Things We Do, That Others May Live.” 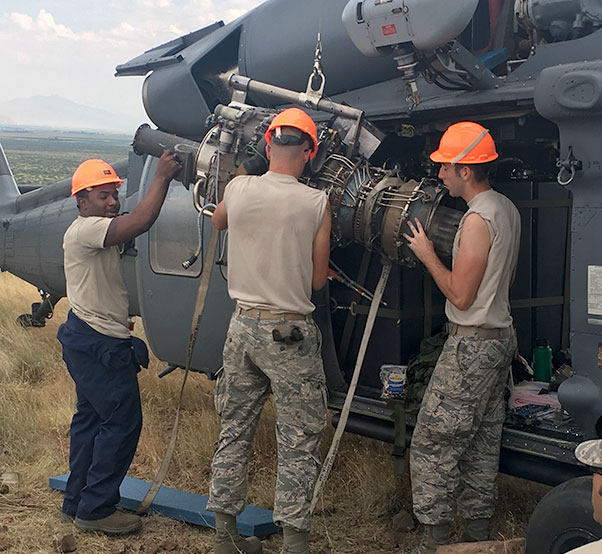