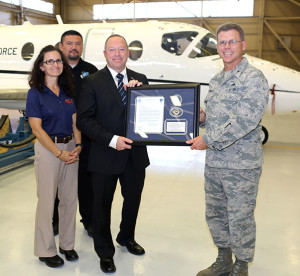 Derived from the Hawker/Beechcraft 400A corporate aircraft and used by the Air Education and Training Command, the Jayhawk is essentially a civil aircraft modified to fit military training needs as an advanced trainer for airlift and tanker pilots.

In order to facilitate repairs on the hail-damaged aircraft, a multi-disciplinary repair team was formed in April 2017 to develop courses of action.

“Wow! What a testament to AMARG’s abilities,” said Col. Jennifer M. Barnard, 309th AMARG commander. “To kick off this first-ever T-1A depot-level repair on my first day is a great start for my time as commander. I am very honored to be taking the reins of such a highly agile and efficient organization with such a professional ‘can-do’ spirit.”

“We had to move quickly since AMARG initially lacked FAA certification and there were no existing procedures,” said Timothy Gray, AMARG deputy director. “The Jayhawk is desperately needed for pilot training and the aircraft is new to the AMARG workforce, and has never had any major repair work performed by Air Force personnel.”

The AMARG’s burning platform challenge was to stand up an organic repair capability before end of Fiscal Year 2017.

“We utilized (Air Force Sustainment Center) Art of the Possible methodology and kicked off the workload two months ahead of the required schedule,” said Gray. “Overall, our Art of the Possible goal is to complete 11 aircraft by end of Fiscal Year 2018. Any new workload of this size is challenging. This is really a challenge given the rapid stand-up for planning and all the parts and equipment that have to be procured through commercial sources. We also have to develop and validate (and verify) all the repair procedures to the original design manufacturer and FAA approvals.”

Without having the usual military technical orders, and for AMARG to perform the needed maintenance, the group required certification as a Military Repair Station in accordance with the Code of Federal Regulations, Title 14, Federal Aviation Regulations.

“With exception of paint workload on KC-10s performed by the Oklahoma City ALC, heavy structural repair on an FAA certified air-frame is something that has never been done before for depot-level repair by an Air Force organization,” Gray said. “I have high confidence in (the 309th) AMARG’s leaders and technicians that we can get this done.” 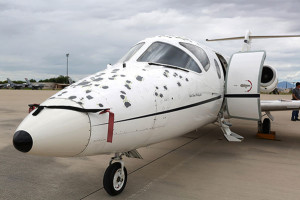 The first of 11 T-1A Jayhawks arrives at the 309th Aerospace Maintenance and Regeneration Group from Laughlin Air Force Base, Texas, Aug.1, 2017, for hail damage repair. A severe hailstorm swept through the Texas base in February 2016 damaging 39 of the advanced trainers. The remaining aircraft will cycle in and out of the AMARG over the next year for depot-level skin replacement.

“We were simultaneously sending people to training, standing up facilities, acquiring equipment, setting up contracts for materials and tech data, building tool boxes and developing overhaul work schedules,” said Gray. “We had to do all that while continuing to support existing work for depot modifications, regenerations, reclamation, disposal and storage sustainment without impact.”

AMARG complied fully with the program and the auditors reporting zero non-compliant areas.

“Because of the unique experience held by technicians at AMARG, we were able to show the major structural repair capabilities of various weapons systems and how AMARG’s quality and compliance meet or exceed FAA requirements,” said Cynthia Sepulveda, chief of AMARG quality assurance. “We will be inducting these T-1As and performing depot-level skin replacement work, and are super excited to have oversight of the first Military Repair Station in AFSC.”

Gilbert Montoya, director of logistics, engineering and force protection at AETC, became a driving force behind the idea after a 2016 visit to review the group’s capacity to perform this type of depot-level maintenance and applauded AMARG’s achievement at becoming a certified MRS.

“According to the T-1 System Program office, once AMARG became an MRS, the repair cost decreased by $17 million, from approximately $63 million to approximately $46 million,” Montoya said. “Because AMARG has taken on this workload, there should also be a reduction in the overall repair schedule by 12 months. The aircraft will be repaired cheaper and returned to service by September 2018.”