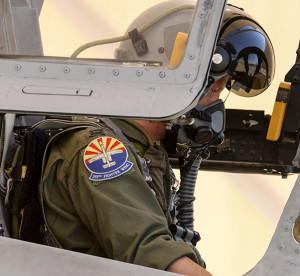 Capt. Michael McCarthy, 354th Fighter Squadron A-10C Thunderbolt II pilot, prepares to take off from Davis-Monthan Air Force Base, Ariz., July 14, 2017. The A-10 has provided close air support in worldwide operations for the past three decades.

Davis-Monthan Air Force Base in Arizona is the third-largest employer in Tucson and one of six military installations responsible for blossoming the local economy, according to a report published by the Arizona Governor’s Office Nov. 15.

The state of Arizona hosts some of the best military training advantages, including permissive airspace for military aircraft, live-fire ranges, more than 300 days of sunshine per year and strong community support.

“We’re lucky to have a community as supportive of our mission and members as Tucson is,” said Col. Scott Campbell, 355th Fighter Wing commander. “Their support enables us to seamlessly and effectively complete our missions stateside and overseas.”

For the full report visit https://azgovernor.gov/sites/default/files/related-docs/militarystudyoptimized.pdf.