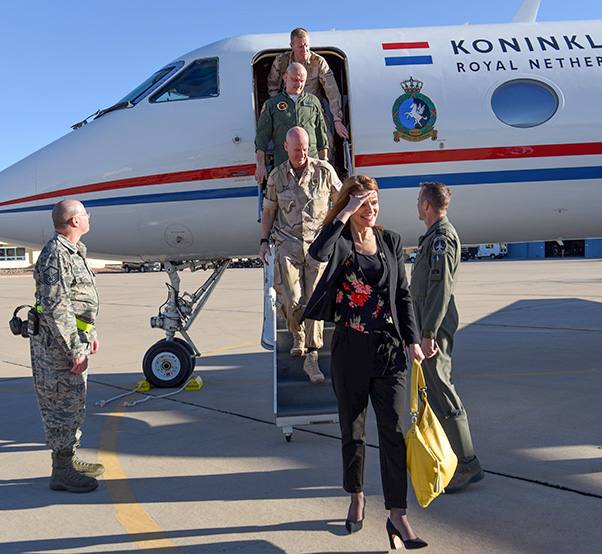 Barbara Visser, State Secretary of Defense from the Netherlands, arrives at 162nd Wing Jan. 24, 2018, in Tucson, Ariz. Visser was part of a group observing the training program for Dutch pilots for the F-16 Fighting Falcon.

TUCSON, Ariz. — The Dutch State Secretary of Defense along with the Vice Chief of Defense and Director of Operations of the Royal Netherlands , took the time to visit the 148th Fighter Squadron at the Arizona Air National Guard’s 162nd Wing located at the Tucson International Airport, Jan. 24.

“The visit from Ms. Visser and other officials highlights the importance of our long standing partnership with the Netherlands. Our F-16 training mission is critical to not only the United States, but to our allied nations around the globe,” said Brig. Gen. Andrew MacDonald 162nd Wing commander. “We are proud of the impact our international training mission has on air power capabilities worldwide.”

The newly appointed Royal Netherlands officials had the opportunity to familiarize themselves with the various military detachments they have in the U.S. as well as get acquainted with the Department of Defense.

The visit was part of a tour in the United States that started at the Pentagon in Washington D.C. where these distinguished visitors met with their U.S. counter parts, said Lt. Col. “Niki” Luijsterburg, commander of the 148th Fighter Squadron.

Brig. Gen. Andrew MacDonald gives a briefing to Barbara Visser, State Secretary of Defense, and other Netherland officials, Jan. 24, 2018, in Tucson, Ariz.. The visitors were at the 162nd Wing to observe the training program for Dutch pilots for the F-16 Fighting Falcon.

Dutch pilots were the first in a long line of international students to ever train with the 162nd Wing. Starting in 1989, they were a mainstay group at the unit for 18 years until they moved to Springfield, Ohio, for a five-year agreement to train with the Ohio Air National Guard’s 178th Fighter Wing.

They returned to the 162nd in 2011 and currently have 10 of their own jets here. The pilots participate in basic as well as advance courses and average about 2,000 flying hours per year.

“We can’t do this job ourselves,” said Luijsterburg. “We have an entire support system with the 162nd where everything that we need to operate and obviously the maintenance organization that is behind it, we are taken care of. A U.S. organization maintaining Dutch jets with
Dutch and American pilots is a great partnership.” 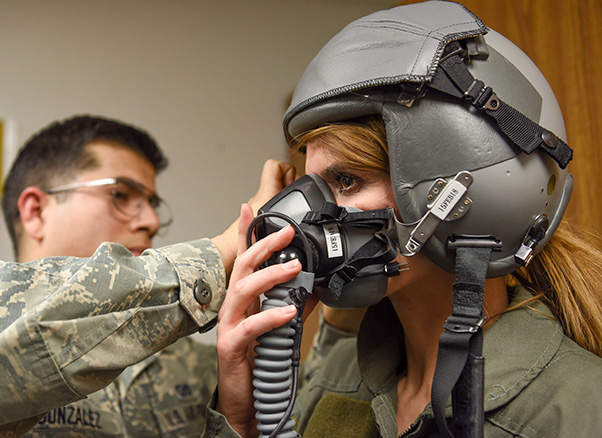 Barbara Visser, State Secretary of Defense from the Netherlands, gets fitted for an oxygen mask by Staff Sgt. Steven Gonzalez Jan. 24, 2018 here. Visser was preparing for a flight in an F-16 Fighting Falcon.

The RNLAF training program is supported by the International Military Student Office personnel before the student pilots step foot in Tucson, the Logistics Readiness Squadron receives, stores and ships more than 10,000 supplies annually.

The Dutch rely on some of the most skilled maintainers in the world. The 162nd Maintenance Group’s personnel average more than 14 years of experience and the 148th Aircraft Maintenance Unit is dedicated to keeping Dutch jets in top shape to support the country’s training mission.

“The visit from the Royal Netherlands Officials was a success. They are very pleased with the cooperation and training at the 162nd Wing,” said Luijsterburg. 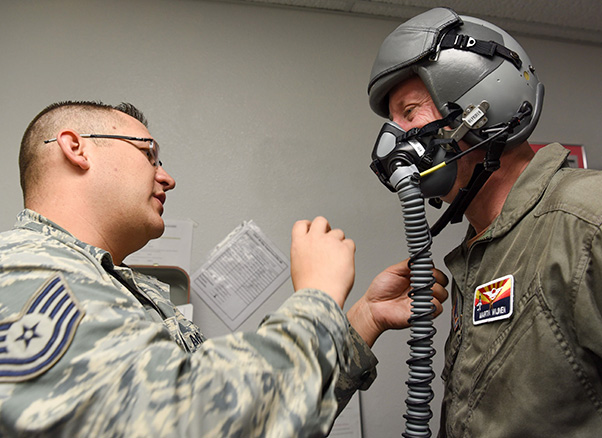 Lt. Gen. Martin Wijnen, Vice Chief of Defense from the Netherlands, tests the seal of the oxygen mask with the help of Tech. Sgt. Kyle Hoagland, Jan. 24, 2018 here. Wijnen was preparing for a flight in an F-16 Fighting Falcon.