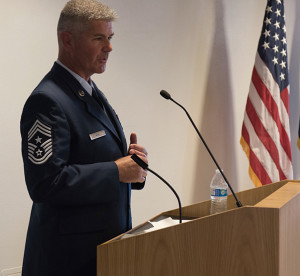 The 162 Wing, based in Tucson, Ariz., celebrated as Joint Headquarters Command Chief Master Sgt. of the National Guard Armando A. Gonzalez relinquished responsibility as the 162nd Wing Command Chief to Chief Master Sgt. Charles H. Neal during the Assumption of Authority ceremony held at the Desert Rose Dining Facility Feb. 11, 2018.

Prior to selection as Command Chief, Neal was Superintendent of the 214th Operations Support Squadron at Davis-Monthan Air Force Base, Ariz.

“He sees talent in people or in his team and he exploits it,” said Handa. “He doesn’t hold it in or keep it in for himself, he asks how we can find ways to share this. From a command chief perspective there couldn’t be a better name tag.”

Starting as a young Airman at Nellis Air Force Base, Nev., in 1979 and throughout his career, Neal has maintained the standard of being the best at whatever opportunity is present.

As the new command chief, Neal anticipates he will continue to foster the development of his Airmen.

“My personal goals are either to pay forward or give back,” said Neal. “I’ve been successful because the Air Force has given me those opportunities.”

Neal understands his role as the spokesman for the commander to the Airmen and he intends to work continuously to improve the lines of communication between Airmen and leadership.

“My secondary goals are to follow the Chief of Staff of the Air Force and try to revitalize the squadrons,” said Neal. “To take what I’m being told at the command level and convert it to a two-striper.”

When asked whether there was preparation for becoming a chief for the wing, Neal explained that being a chief goes beyond knowing the job.

“He (Gonzalez) sets the foundation of what is expected in the description of the job itself,” said Neal. “I think we are expected (as chiefs) when we’re picked to own it. I think we are picked for our personalities and leaderships.”

Neal says he will take the next three years and make them his own to be the voice he wants to be for commander to communicate with his more than 1700 Airmen.

For Neal, the focus wasn’t to become chief; it was to be good at what you are doing right now.