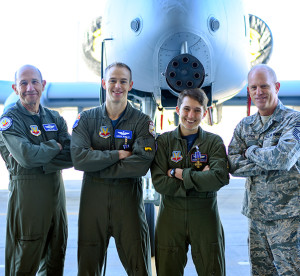 The DFC is awarded to any officer or enlisted person of the U.S. Armed Forces who has distinguished themselves in combat in support of operations by heroism or extraordinary achievement in flight.

Schultz and Harvey displayed superior flight leadership and exemplary Airmanship while engaging fighters from the Islamic State in Iraq and Syria during a close air support mission in support of Operation Inherent Resolve.

“We’re there to support, protect and bring our ground forces home,” Schultz said.

When a U.S. joint terminal attack controller reported that his team was surrounded and under intense direct fire, Schultz and Harvey immediately located the friendly forces and began to assess the enemy’s coordinated attack.

“Talking with the JTAC—I learned what fear sounds like,” Harvey said. “All that mattered was he needed us at that moment.”

Harvey descended in her aircraft in an attempt to display a show of force to deter further enemy aggression while Schultz executed four strafe runs directly onto the enemy threat.

“It was dark, but I had a job to do,” Harvey said. “I thought to myself, this is the moment that I’ve been training for.”