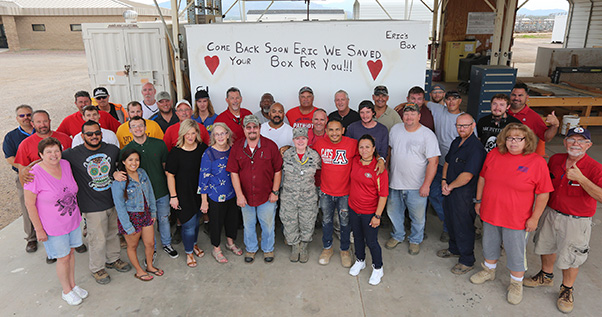 Brig. Gen. Stacy Hawkins, commander of the Ogden Air Logistics Complex at Hill Air Force Base, Utah, presented members of the 309th Aircraft Maintenance and Regeneration Group with the Command Civilian Award for Valor and other various awards Aug. 29, 2018.

“This was an unexpected act of heroism,” Hawkins said. “These people put a greater interest above their self-interest and today we recognize their efforts in saving a life.”

When Eric McOllough, 309th AMARG painter, began experiencing light-headedness, nausea, tingling sensations in his arms and shortness of breath, his team quickly responded to his condition.

“I wasn’t thinking anything serious,” said Todd Putnam, 309th AMARG Aircraft Production Tooling Section supervisor. “I assumed he was exhausted. Being so far out here, it’s better to be safe than sorry.”

McOllough’s symptoms escalated and within moments he became unconscious and unresponsive. Members of the team hurried to grab the automatic external defibrillator and call Davis-Monthan AFB’s emergency services. 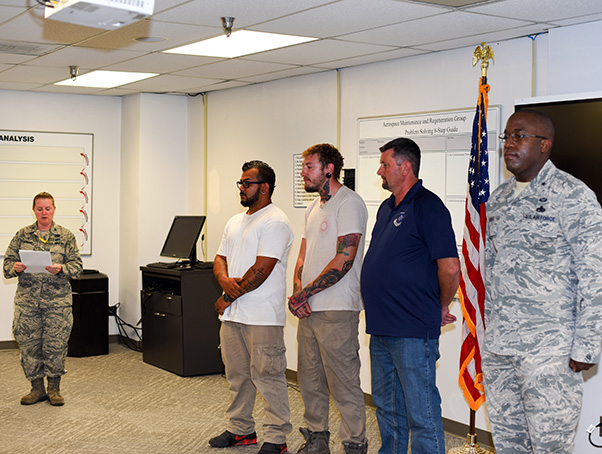 “It was a team effort,” Putnam said. “Dawn McGrew, our work lead, grabbed the AED and Josh Grey has [emergency medical technician] training, which played an essential role. Chris Sanchez, along with a lot of the guys, were moving boxes and going out to direct the fire department and the ambulance to where we were located.”

With a quick response and calm demeanor, members of the 309th AMARG Tooling Section were able to save the life of a coworker and friend.

“It’s one thing to receive this type of training, but for it to actually happen is hard to explain,” Putnam said. “We’re one family and that’s exactly how we treat all of our teammates. Whether you’re a contractor or a direct employee, you’re a part of our family.”