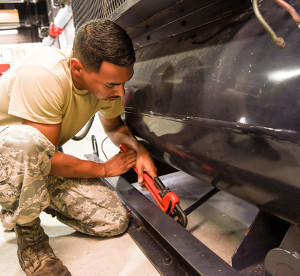 Senior Airman Edgar Pacheco, a powered system support mechanic with the 162nd Maintenance Squadron Aerospace Ground Equipment Flight, turns a wrench on an MB-8 building compressor, as he performs a hydrostatic test on the equipment. The equipment requires this specialized testing every five years, which consists of pumping water into the tank to determine if it can hold pressure.

The Aerospace Ground Equipment flight operates by its motto, “There’s no air power without ground power.” Employing about two dozen Airmen, the shop maintains more than 300 pieces of equipment, from hydraulic systems to generators to bomb-lift loaders, all of which help maintainers across base sustain the flying mission without burdening the aircraft’s systems.

“Aircraft engines are based on hours of maintenance, so we don’t want to run the engines while they’re on the ground,” explained Master Sgt. Albert Chambers, a support equipment mechanic in the flight. “So our equipment takes over and does everything for that aircraft that an engine would supply—hydraulic power, electrical power, A/C controls.”

Just like the jets they service, aerospace ground equipment requires routine maintenance, scheduled inspections, and the occasional spontaneous repairs. According to Master Sgt. Louis Suarez, a powered system support mechanic, the average in-commission rate for ground equipment is between 75 and 80 percent, Air Force-wide. However, Suarez reported that the shop has managed to sustain around 92 to 95 percent readiness for most of the year, thanks to innovation, experience, and hard-working Airmen. 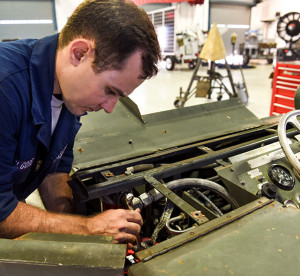 “It helps our customers so we can provide them with good, quality equipment,” said Suarez. “And like everywhere right now, we’re doing more with less.”

Suarez estimated the size of the unit is about a third of the size of an average active duty AGE flight, therefore efficiency is essential. One example of their resourcefulness is the use of their specially designed petroleum dispensing system, which they refer to as their “Jiffy Lube system.” The design is simple: petroleum drums are hooked up to a variety of tubes that are distributed to various stations in their work bay, saving Airmen trips and containers to get the oil and lubricants to do their work.

Another precedent of outside-the-box thinking was the construction of the shop’s fuel bowser. The unit welded together their first mobile fuel delivery truck in 2006, after they found that the Petroleum Oil and Lubricant shop truck, which they were also borrowing for efficiency, was too big for their needs. They are due to receive an upgraded version, but their first truck served them dutifully for more than a decade.

“We used to tug equipment off the flightline to the fuel pumps, but that cost time with towing and FOD checks,” said Suarez. “After we made the bowser, we had been taking that out since.” 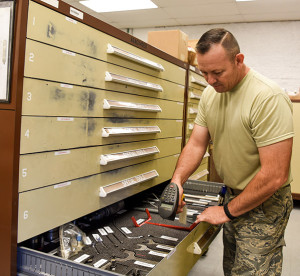 Suarez also credits the collective knowledgebase of the flight’s mechanics for the success the unit. Unlike active duty bases, turnover is much lower at a guard unit, and therefore mechanics have time to become experts in their craft.

“We have people here turning wrenches that have been AGE mechanics for ten, 15, 20 years,” said Suarez. “We’re efficient because we know how to troubleshoot quickly. We can almost listen to a unit and tell you what the problem might be. Knowledge really is power.”

Working together that closely for years has not only impacted continuity in the shop, but Suarez said that the AGE flight operates more like a family, even after duty hours. As a flight, they have cleaned local parks with Tucson Clean and Beautiful, fed the homeless at Gospel Rescue Mission, and every year, adopt a family in need of support during the holiday season. According to Suarez, that community-orientation translates to a team-oriented focus at work.

“It’s teamwork. Not just one of us could do it—it takes all of us together,” said Suarez. “The guys on the shop floor are just good people; good, hard-working airmen.”