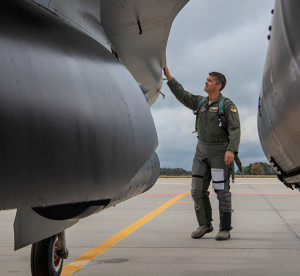 Ample Strike is an annual Czech Republic-led, live exercise intended to increase proficiency levels for all forward air controllers and joint terminal attack controllers (JTACs), as well as to improve standardization and interoperability among NATO allies and partners.

“The purpose of the exercise is to work with allies and partners, specifically JTACs, on the ground,” said Col. Allen Kinnison, 162nd Operations Group commander. “There are 19 countries here and more than 20 JTAC teams. They are working all day and into the night with different platforms to include even artillery.”

JTACs direct the action of combat aircraft engaged in close air support and other offensive air operations from a forward position. During the exercise, JTACs are on the ground at several training ranges in the Czech Republic calling in air strikes from fighter aircraft flying above.

“It’s pretty awesome you get to hear guys do the same thing you do in their second language,” said a Senior Airman Joint Terminal Attack Controller from the 321st Special Tactics Squadron, Royal Air Force Mildenhall, England. “We all have different methods and techniques. So, you always learn something from them.”

In addition to F-16s and JTACs, U.S. participation in the exercise is comprised of active duty, Guard and Reserve Airmen, B-52H Stratofortress aircraft assigned to the 307th Bomb Wing, Barksdale Air Force Base, Louisiana, and KC-135 Stratotanker aircraft assigned to the 155th Air Refueling Wing, Nebraska ANG. This seamless integration allows the U.S. to maintain a global presence through the combined efforts of Total Force Airmen. 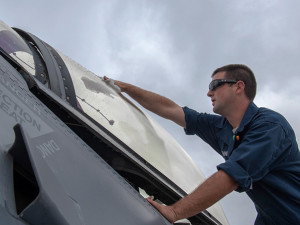 “This is awesome for the Arizona Air National Guard, and specifically for the 162nd, to be participating in a tactical exercise,” said Kinnison. “Since we are a formal training unit, people come to us. We are the schoolhouse. So, bringing us out and doing something operational, versus formal training, is great.”

This is the first year the Arizona Air National Guard has participated in Ample Strike and is the third year the Czech Republic has hosted the exercise.

The relationships and close cooperation built among NATO allies and European partners during these exercises provide the strategic access critical to meet our commitment to respond to threats against them.

Kinnison emphasized the importance of these types of exercises in an increasingly complex security environment.

“It’s important that we are engaged in exercises like this with countries as far east as we can be,” said Kinnison. “If it was just the U.S. and Czech Republic, I think it would be nice but not as much as working with 18 NATO allies and partners while strengthening capabilities and relationships.”