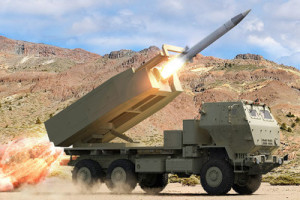 TUCSON, Ariz.–Raytheon Company has completed a significant milestone in the development of its long-range DeepStrike™ missile to meet the U.S. Army’s Precision Strike Missile, or PrSM, requirement.

The company has integrated its new launch pod missile container into the Army’s M142 HIMARS and M270 MLRS launchers.

“Raytheon is responding to the U.S. Army’s desire to accelerate its PrSM program,” said Dr. Thomas Bussing, Raytheon Advanced Missile Systems vice president. “We are on a fast track to deliver an advanced surface-to-surface missile that exceeds the Army’s requirements by doubling the firepower while reducing the cost.”

Featuring an innovative, two-in-the-pod design and an advanced guidance system, Raytheon’s new long-range precision strike missile will fly farther, faster and pack more punch than the current weapon, which is approaching the end of its service life.

As the next-generation surface-to-surface weapon for the Army, the DeepStrike missile will defeat fixed land targets 60-499 kilometers away, improve lethality and responsiveness compared to current systems, and restore the Army’s capability to overmatch the threat.

Face of Defense: Airman finds his life’s direction as maintainer