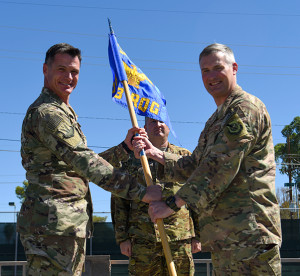 Col. Michael Drowley, 355th Fighter Wing commander, presents Col. Jason Pifer, 563rd Rescue Group commander, with a guidon at Davis-Monthan Air Force Base, Ariz., Oct. 5, 2018. The guidon was presented to Pifer in commemoration of the 563rd RQG’s realignment from the 23rd Wing to the 355th FW.

The 563rd Rescue Group, a geographically-separated unit out of Moody Air Force Base, Ga., was realigned from the 23rd Wing to Davis-Monthan AFB’s 355th Fighter Wing Oct. 1, 2018.

The realignment brought all rescue squadrons and maintenance units that fall under the 563rd RQG, to include other geographically-separated assets located at Nellis AFB, Nevada, under the supervision of the 355th FW.

“This realignment gives us unity of command over a team that we’ve been working with for years,” said Col. Mike Drowley, 355th FW commander. “This brings us closer to a ‘One base, One boss’ concept which better helps us take care of assets on the installation.”

Since its activation at Davis-Monthan AFB in 2003, the 563rd RQG has worked diligently with the 355th FW do, in part, to their closely related operations.

“The rescue community and the A-10 community have a very synergistic mission,” Drowley said. “Having them as part of our family now allows us to better care for them as an Airman team and provide them with whatever they need to get their job done more efficiently.”

As a result of their previous and ongoing working relationship, the 355th FW and 563rd RQG realignment will have very little affect on missions here.

“Because the 563rd has been a mission partner for so long, their incorporation will not have a tremendous impact on our day-to-day activities,” Drowley said. “This just helps give us better insight on how to help prioritize resources in order to provide a greater benefit to their operations.”

With this realignment, the 355th FW has increased its capabilities by integrating with a team that possesses a like mission set and can now provide greater support to troops downrange.

“Now that this transition is official, everyone is looking forward to moving out and executing future operations together,” Drowley said. “We’ve always had a close relationship with this group and this consolidation is going to take everything to the next level.”