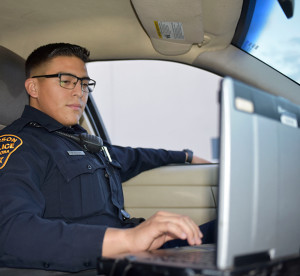 Air Force Staff Sgt. Rodrigo Acosta, a security forces specialist with the Arizona Air National Guard’s 162nd Wing and a Tucson Police Department police officer, reviews data on his patrol car laptop in Tucson, Ariz., Aug. 28, 2018. Acosta said he thrives in settings outside of the office environment. “I can’t see myself sitting behind a desk at all. I think I would fall asleep,” he said. “Law enforcement and security forces always keeps me on my toes.”

While others suffered through adjusting to Kuwait’s triple-digit temperatures, for Acosta and others from his unit the temps weren’t too different from home.

Even though his unit had to deal with heat-related issues, “we still felt we had it a little bit better than troops from the East Coast because we were Arizonans,” he said.

The experience showed how one part of his life would prepare him for something else, similar to how his current military position paved the way for a career as a civilian police officer with the Tucson Police Department.

“I always thought law enforcement and the military went hand-in-hand with each other [because] it’s all about keeping people safe,” he said.

Acosta said his interest in law enforcement began as a kid watching movies.

“The lights, the sirens, the cop cars, the uniform, getting the bad guy and the excitement and thrill of it all – it really got my attention,” he said. “I just knew I wanted to be a cop.”

But to fulfill his boyhood dream of being in law enforcement, Acosta had to be 21 years old. So shortly after high school, he enlisted in the Air Guard as a way to develop the skills and abilities necessary to become a successful police officer.

“Being in the military did make my time easier at the police academy in having that leg up, and making me feel comfortable using the skills and maneuvers within a team operation,” he said.

While Acosta’s military duties are mostly confined to base security, he said security forces training – from searching vehicles, dealing with potentially hostile individuals, clearing buildings and preparing for active shooters – have provided an additional layer of knowledge that can be applied to his civilian law enforcement career.

“My military background helps [the civilian side] as far as those tactics,” he said. “It made me feel more prepared than somebody who has not gone through security forces training.”

Acosta added that his civilian training and experiences in first aid and CPR have not only given him additional skills he could use when on military duty, but also has allowed him to assume greater leadership roles within his squadron.

“Working in the civilian side has provided me with real-life situations where medical care had to be used,” he said. “Therefore, I use the knowledge that I have gained from those experiences to mentor other Airmen.” 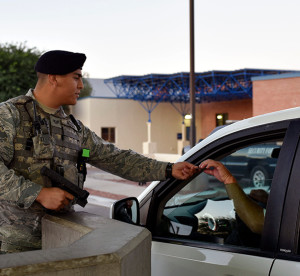 Air Force Staff Sgt. Rodrigo Acosta, a security forces specialist with the Arizona Air National Guard’s 162nd Wing, conducts an identification check at Tucson Air National Guard Base in Tucson, Ariz., Sept. 8, 2018. When not wearing an Air Force uniform as a security forces specialist, Acosta serves as a police officer for the Tucson Police Department. “Both jobs have the same mindset when it comes to teamwork and building trust among your comrades,” he said.

But it’s the common traits of both positions, Acosta said, that make him feel indispensable. “Both jobs have the same mindset when it comes to teamwork and building trust among your comrades,” he said.

Though he relishes both of his positions, Acosta said that equal dedication to the Air Guard and the police is a precursor to job satisfaction and career progression.

“I don’t give preference to one job over the other,” he said. “If I was doing that, I’d start to fall back and never feel a sense of accomplishment with anything.”

Now, roughly a year into his career as a police officer, Acosta said the preconceived visions of being a cop from the movies he saw as a kid have been replaced with something more profound.

“As I got older, I realized it’s a bigger responsibility,” he said. “It’s more about helping people who can’t help themselves.”

Acosta had a similar feeling for the Air Guard side.

“Security forces is contributing to the Air Force’s warfighting capabilities because of the security that we provide for the pilots and for Airmen who are supporting that mission,” he said.

For now, regardless of whether he’s wearing a police or Air Force uniform, Acosta said he has no desire to be confined to an office setting.

“I can’t see myself sitting behind a desk at all,” he said. “I think I would fall asleep. Law enforcement and security forces always keeps me on my toes.”