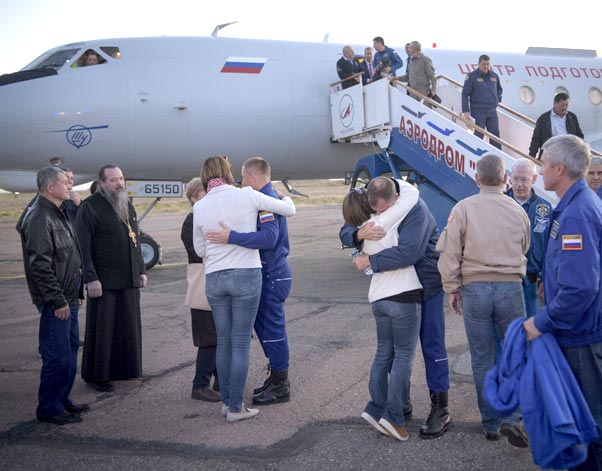 American astronaut Nick Hague and Russian cosmonaut Alexey Ovchinin resting comfortably in the city of Baikonur, Kazakhstan, after an anomaly shortly after their launch.

The Soyuz-10 spacecraft launched from the Baikonur Cosmodrome in Kazakhstan to the International Space Station at 4:40 a.m., EDT, Oct. 10 carrying Hague and Ovchinin. Shortly after launch, there was an anomaly with the booster, and the launch ascent was aborted, resulting in a ballistic landing of the spacecraft.

Search and rescue teams deployed to the landing site, arriving on location before the spacecraft landed. Hague and Ovchinin were recovered from the capsule and were in good condition. The crew by landed south of the city of Zhezkasgan, Kasakhstan, and was transported helicopter to the nearby city. A Roscosmos plane then flew the pair to Baikonur, where they were greeted on the tarmac by their families, NASA Administrator Jim Bridenstine, Roscosmos Director General Dmitry Rogozin, and other NASA and Roscosmos officials.

Hague and Ovchinin were taken to a local hospital for precautionary medical checks. They are scheduled to return to the Gagarin Cosmonaut Training Center in Star City, Russia, on Oct. 12. Hague is expected to fly to Houston next week.

In an interview, Bridenstine share his experience witnessing the launch in Kazakhstan, as well as his admiration for the NASA and Roscosmos teams who demonstrated how well prepared and expert they are in responding to the situation. He also gave high praise to Hague’s wife, Catie, for remaining cool under pressure.

Roscosmos director Rogozin said in an interview that he was pleased with his team’s response, and that a Russian commission would work to understand the cause of the failure and continue working with NASA and the rest of the ISS partner agencies to support continued station operations.

Kenny Todd, ISS operations integration manager, shared his thanks with the Russian search and rescue teams in a news conference on NASA Television, praising their professionalism and expertise in doing their jobs quickly and efficiently to ensure the safety of the crew. He noted the station is well-supplied for the Expedition 57 crew members who are on board.

Deputy Chief Astronaut noted the safe return of the crew members is good news, demonstrating that the safety systems worked as designed, and the teams performed as they have practiced, to ensure the safety of Hague and Ovchinin.

NASA’s astronaut candidates to graduate with eye on Artemis missions