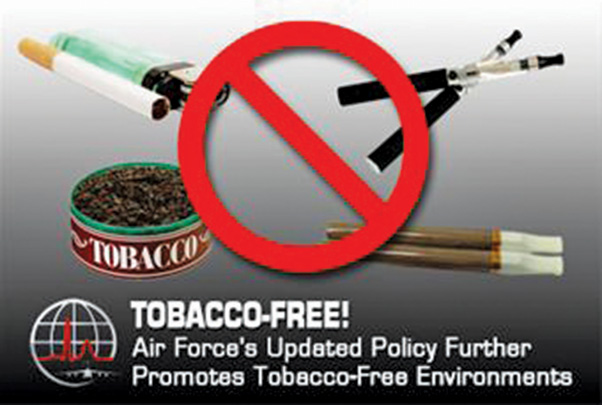 WASHINGTON (AFNS) — The Air Force has led the military in advancing innovative tobacco control policies, such as the tobacco-free medical campus and prohibiting tobacco use outside “designated tobacco areas”. Now, an updated Air Force Instruction, published in March, seeks to further reduce health impacts from smoking, the nation’s leading cause of death.

Oh cited recent progress in reducing smoking in the Air Force, with credit being shared widely among Airmen, supervisors, senior leaders, and medical staff.  “Since 2008, our Web Health Assessment data has shown smoking has declined 39 percent among active duty Airmen,” said Oh. “Our smoking prevalence among active duty Airmen is actually lower than the Healthy People 2020 national objective of 12 percent,” he said.

Oh clarified that electronic cigarettes, or e-cigarettes, fall under the same restrictions as conventional cigarettes.  “We define e-cigarettes as a tobacco product because that is how they are defined under the Federal Food, Drug and Cosmetic Act,” he said.

While acknowledging that some contend that e-cigarettes are not as harmful, Oh said the long-term safety of e-cigarettes is currently unknown.  “AFI 40-102 treats e-cigarettes like any other tobacco product.  We will consider changes to this policy based on scientific evidence and in consultation with subject matter experts in DoD, Food and Drug Administration, and Centers for Disease Control and Prevention,” he said.

Tobacco users ready to quit are encouraged to visit DoD’s Quit Tobacco website (www.ucanquit2.org) and consult with their healthcare provider or installation Health Promotion program.  The best way to quit is through combining tobacco cessation medications and counseling.

Oh said tobacco users should not be too discouraged if they relapse after quitting, since it may take multiple attempts to quit before success.  “The average smoker loses 10 years of life compared with nonsmokers, but you can gain back all or nearly all of these 10 years if you quit now.  We want all our Wingmen to live long, healthy, productive lives, and Tobacco Free Living is the cornerstone,” he said.