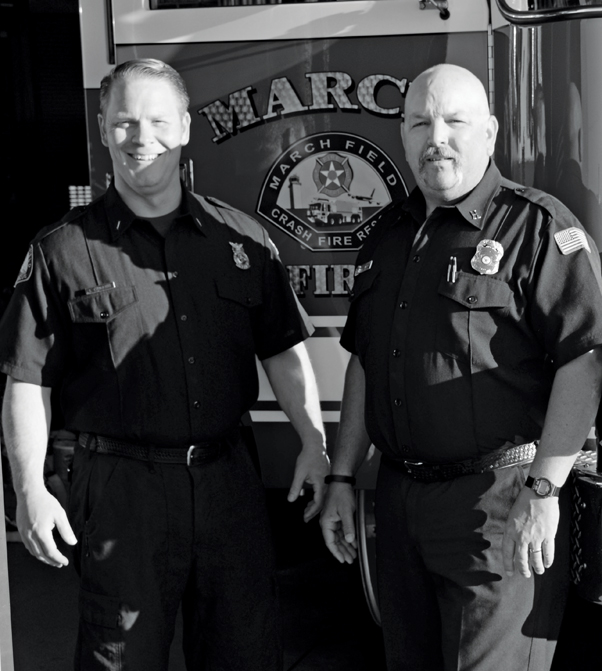 Engineer Jeremy Gerrish (left) and Fire Capt. Frank Hanson, March Air Reserve Base Fire Protection Flight, were part of a strike team (five engines and one fire chief officer) sent to Corona, California, April 19, 2015, to assist with the Highway Fire, a wildfire that had the potential to become very large.

The March Field Fire Department sent a strike team (five engines and one fire chief officer) to Corona, California, April 19, to assist with the Highway Fire, a wildfire that had the potential to become very large.

Fire Capt. Frank Hanson and Engineer Jeremy Gerrish, both with the March Air Reserve Base Fire Protection Flight, were part of that strike team.

“As a fire captain everyone’s safety is my first concern. They don’t need to worry that their lead isn’t prepared, and in turn this helps their ability to focus on doing their job,” said Hanson “I would like to think there is a trust built. We have worked together for years at the station, and the relationships there have grown into a brotherhood.”

Gerrish, who fights fires as a Defense Department employee and as a Reserve Airman, said that balancing the two roles is challenging but ultimately rewarding.

“To know that I’m supporting my local community and keeping the area safe from fire on the blue side (civilian) and ready and able to protect citizens of the United States on the green side (military) is what motivates me,” he said.

(NOTE: Other fire departments that sent strike teams to aid in the Highway Fire were Cathedral City, Hemet City, Palm Springs and Riverside City. The Highway Fire is fully contained, after burning 1,049 acres near the Prado Basin where Highways 71 and 91 intersect, according to ca.gov.)