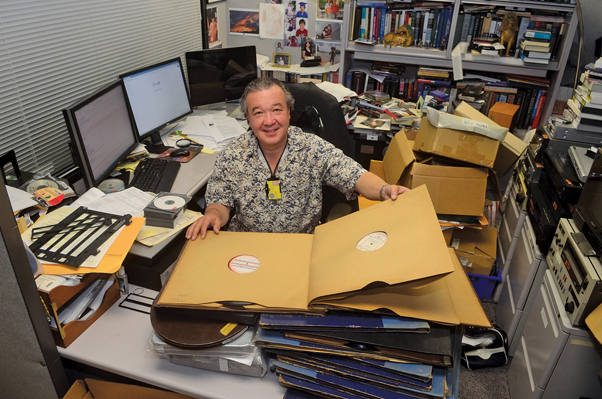 Defense Visual Information Record Center archivist Pedro Loureiro, sifts through mounds of submitted materials in his office at the Defense Media Activity-Riverside, California, adjacent to March Air Reserve Base. Loureiro, who holds a PhD and is a former college professor, is on a quest to find and preserve military history.

RIVERSIDE, Calif. – Treasure is tucked away in a building a street away from March Air Reserve Base. It’s hard to find because it’s in Defense Visual Information Record Center archivist Pedro Loureiro’s office, mixed in with a bunch of, well let’s be diplomatic here – “non-treasure.”

Loureiro’s job is to sift through more than 5,000 still images and 500 motion and audio products to find items of historical significance that tell the story of the Defense Department and the United States: visual treasure.

Air Force history is well represented with rocket and missile launches, aircraft, historic productions and combat camera documentations from March Field; Vandenberg, Los Angeles, Barksdale and Norton Air Force Bases; and Niagara Falls Air Reserve Station.  At one time Norton AFB was the central repository for all DOD films. Much of that repository was transferred to the Defense Visual Information Record Center when Norton closed.

In addition to Air Force historical imagery, Loureiro has slides from a private collection that have not been publicly viewed.

“I was sent rare slides of the evacuation of the U.S. Ambassador and his staff from the Embassy in Phnom Penh, Cambodia, by a U.S. Vietnam War era vet who was a combat cameraman at the time,” said Loureiro.

Some imagery originated on a most unusual surface: glass. Some of the footage brings on laughter, he said.

“We have photos of the U.S. Navy Base in Norfolk, Virginia, that were first displayed on hundreds of glass plates in the early 1900s,” Loureiro said. “Some of the most memorable footage I’ve seen is some of the ‘why join the Army’ recruiting videos from the ‘60s,” Loureiro said.  “Seeing those bell bottoms and long hair, and listening to the way they talked back then was quite entertaining.”

Not all the history Loureiro sifts through is about the military.

In 2012, a former colleague, Mary Carnes, found a reel of show segments of one of the greatest TV shows of all time, “The Tonight Show with Johnny Carson,” that didn’t exist anywhere else in the world. The show had a remarkable run on American TV from 1962-1992. Until 1972, Carson’s network routinely recorded over old show tapes with new programs because tape was so expensive.  For unknown reasons, someone from the Armed Forces Network (AFN) Broadcast Center kept a reel of Carson segments that hadn’t been seen by anyone since they first aired. It was Loureiro who played the reel for Jeff Sotzing, Carson’s nephew and the CEO of the Carson Entertainment group. The AFN subsequently donated the reel to Sotzing.

So why would Loureiro, a former college professor with a PhD, drive 90 minutes a day to take a GS-11 job?

“I saw the job here as an opportunity to create the primary sources of military history that I had been using,” he said.

When Loureiro talks about finding a gem in the stacks of routine objects, and his face transforms into nothing but a huge smile and arched eyebrows that you know the man is “all-in” with his quest to find and save military history.

He’s not alone in that quest. In addition to Loureiro, his team sorts through, and logs in all media.

Roxanna Rawls and Dennis Martin are the media managers for motion imagery. They conduct preliminary sorting of incoming media to determine if the images should be a permanent or temporary record. Steve McGill and April Alexander do the same work for still imagery. Johnnie Williams is the media manager for film, and stills, and Lono Kollars is the chief of Multimedia Services, who ensures all equipment, software and digitization formats are current and meet National Archive/Library of Congress-approved standards. All media meeting the correct criteria is digitized and then sent to the National Archives as a permanent historical record.

It’s that opportunity to have an individual’s work or name permanently added to our nation’s history that gives Loureiro a big, juicy, digital carrot for private collectors that would otherwise not give up their imagery.

“I tell them that if they send their images to me, we can digitize (them), and archive (them) for future generations,” he said. “Add to that, I’ll give them a digital copy of their old Beta tapes, reel-to-reels and old photos. That gives them their own durable image.”

Much of the existing media from American Forces Radio and Television Service (AFRTS) comes from private collectors, the producers themselves, or a relative.

“Up until about 1 ½ years ago, AFRTS was exempt from submitting their material for life-cycle management and eventual transfer to the National Archives,” Loureiro said. “That is why it is so hard to locate AFRTS historical content now. We’d love to have more!”

It’s no stretch to say Loureiro is loved and appreciated by the historians and media reps he encounters. When a request comes in for historical information or imagery, the doctor turns part detective and part treasure hunter, coming up with sparkling tidbits.

In the last several months he won the praise of a producer creating a documentary on how the Vietnam War’s Hue Offensive impacted the American Forces Vietnam Network, and answered an international researcher’s question about whether the song “White Christmas” was the sign to evacuate Saigon. It was, but it was Tennessee Ernie Ford’s version, not the Bing Crosby one.

It’s Loureiro’s passion and love for history that makes him what he is – a treasure hunter extraordinaire.