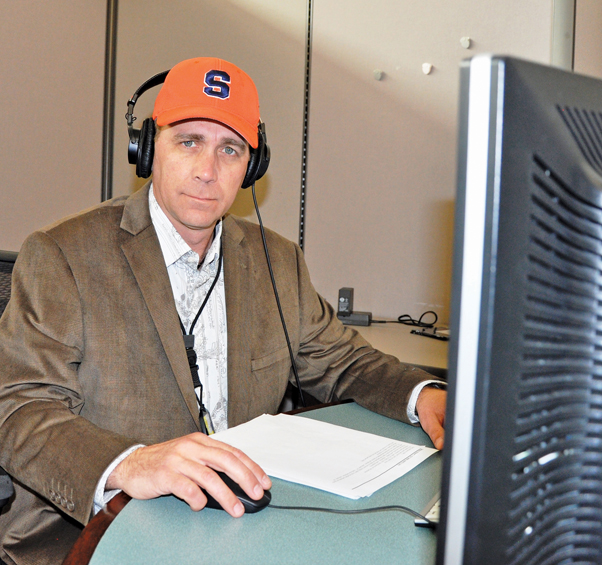 Robert Sekula’s ever-present hat is as much a part of him as a toe or finger, but his top cover doesn’t do him justice. He should be wearing eight or nine nested together.

Sekula, a broadcast journalist for the American Forces Network (AFN) Broadcast Center, March Air Reserve Base, is a one-man TV station. He can shoot, edit, direct, voice, light and write. Versatility became necessity when he worked in Hollywood.

“It was feast or famine, working or unemployment,” said Sekula. “If I wanted to work, I needed to be flexible.” And work Sekula did. He scored loads of gigs, including “Walker, Texas Ranger,” “The Chase,” “The Dentist,” “Standoff,” “The Journeyman” and different music videos.

Unlike many in Hollywood, he didn’t focus on one narrow specialty. “I worked hundreds of big-to-no budget shoots as a production assistant, assistant splinter unit director, audio technician or lighting director.” Sekula felt his experience made him a better director. “Wearing all the hats helped me, as a director, understand what I was asking each specialist to do.”

Still, there were gaps of no work and no cash, so Sekula looked into serving with the Navy. “They offered me any job I wanted,” said Sekula. “I asked for broadcast journalist, and they said any job but that one, how about nukes?”

He eventually did get the broadcaster offer he wanted, graduating from boot camp the day he turned 30 in 2001. “They called me old man, grandpa, you name it,” Sekula laughed. “But I still out-ran just about everybody. My instructor called them the couch potatoes of Generation Nintendo.”

Sekula attended broadcast journalist training, and the military amplified his versatility by teaching him something new:  how to shoot and edit his own video. “The military does a great job of teaching you how to be a jack-of-all-trades journalist,” Sekula said.

After attending broadcast journalist training he spent a bit under seven years in the Navy,  with assignments that included the Navy Media Center, and on the first U.S. aircraft carrier to  visit Sierra Leone in decades.

He eventually left the Navy and worked as a federal government employee at AFN Europe’s regional production center in Vicenza, Italy, where he produced popular “Europass” segments that showed the audience how to get to, and enjoy, popular off-duty destinations. The chief of Europe’s regional productions at the time, Charlie Gill, chose Sekula to lead AFN’s Summer Paralympics coverage in London in 2012.

“He was in charge of a team that produced several reports a day under strict deadlines to make the stories relevant,” said Gill. “He also produced a very touching and uplifting final special report that tied together the stories of wounded warriors who were competing.”

When Sekula left Europe in 2013 for a position at the AFN Broadcast Center he was routinely chosen for high-profile productions. Sekula’s current boss, Kyle Hammitt, echoed Gill’s comments. “Robert can do it all.”

Sekula shot and produced products from the 2014 Grammy’s, The Guys Choice Awards and Comic Con in San Diego, California.

While at Comic Con, Sekula melded his knowledge of Hollywood, production and the military to arrange for Wounded Warriors to get passes to attend the highly-coveted event, which had been sold out for close to a year.

Sekula’s helpful spirit extends to his personal life as well. He recently moved into a small apartment to be able to afford to send his wife Jessica to Texas to help take care of a relative with severe health needs.

In all his life’s experiences, Sekula recognizes he’s a hard guy to typecast. “I’ve reinvented myself more than anyone I know,” he said, peering out from behind his AFN hat. That extends to his hobby as a rock musician.