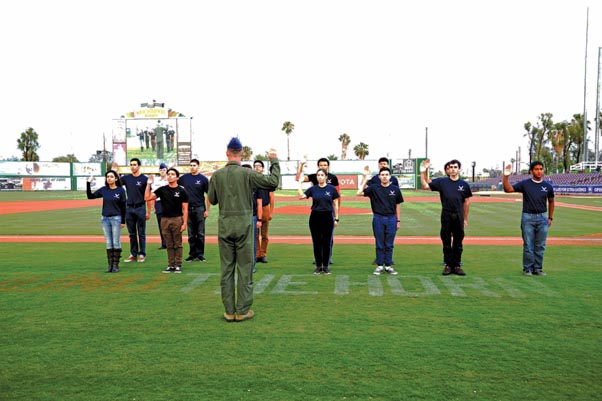 Kevin Mitterholzer
Lt. Col. Erin Meinders, commander, 362nd Recruiting Squadron, swears in 13 new recruits to the Air Force Reserve, during the Inland Empire 66ers Military Appreciation Night at San Manuel Stadium in San Bernardino, California, May 16, 2015. The newly sworn-in Airmen from as far as Victorville, Riverside, and Upland, will be shipping off to participate in Basic Military Training at Joint Base San Antonio, Texas very soon.

Thirteen recruits from as far as Victorville, Riverside and Upland, traveled to San Manuel Stadium, San Bernardino, California, home of the Inland Empire 66ers Baseball, Saturday, May 16, to take the oath and become the newest Airmen in the U.S. Air Force Reserve.

The 362nd Recruiting Squadron, March Air Reserve Base, conducted a swearing-in ceremony on the infield at the stadium on Armed Forces Day to kick off the 66ers’ Military Appreciation Night.

The 66ers, who have held the annual event for more than 10 years, provided free tickets to all service members and veterans, in honor of their military service, for the game against the Lancaster Jethawks.

“It’s always important to recognize the military in any way we can,” said Jarrett Stark, 66ers group sales account executive. “Military Appreciation Night is just one way that we can do that. It’s important for us to show that we support the military and everything they do for us.”

Local recruiters from the Air Force, Army, and Marine Corps were also there to talk to game attendees and hand out a variety of promotional items.

“Events like this give (our) recruiters an opportunity to give back to the local communities that support and welcome us into their cities, in addition to being able to display a positive example of the Air Force,” said Tech Sgt. April Silveira, 362 RS recruiter.

The newly sworn-in Airmen will be shipping off to participate in Basic Military Training at Joint Base San Antonio, Texas very soon.

The 66ers organization, in partnership with Wells Fargo, also sponsor the Hometown Hero Program, where each home game they recognize a military veteran or an individual who does great things in the community to be highlighted during the game. Several Team March members have been honored through this program during the past few seasons.