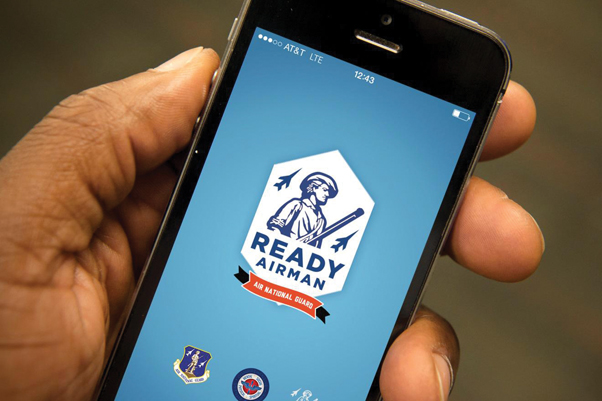 JOINT BASE ANDREWS, Md — The Air National Guard Community Action Information Board, in partnership with the safety, personnel and manpower, chaplains, and Surgeon General Directorates, have updated the portfolio of applications available on the ReadyAirman.org site and mobile app.

Initially debuted at the ANG Executive Safety Summit earlier this year, ReadyAirman.org is already receiving positive reviews from users and has topped 25,000 likes on social media.

“Starting in 2005 with SeeAndAvoid.org, joint midair collision avoidance, ANG safety garnered more than a decade of experience innovating, developing, and fielding useful web and mobile platforms for Airmen, families and communities–many of them going on to recognition as Air Force or even joint service best practices.” said Col. Edward L. Vaughan, director of safety and executive director of the ANG CAIB.

Ready Airman brings three successful legacy programs under one umbrella to serve as the ANG content hub for readiness, risk and resilience information, as well as the home of the ANG’s suicide prevention outreach and wingman day planning efforts. The ANG pioneered online delivery of resilience content for airmen and families in 2007 with the AF-best practice Wingman Project.

“When it comes to resilience, risk, and readiness, we already had three well-performing brands in the public space with interconnected missions: Wingmanproject.org, Ready54.org and Wingmanday.org,” said Lt Col Roberto Balzano, ANG Risk Management program manager.  “We worked closely with our stakeholders and customers to bring those programs into one-stop shopping for our Airmen and families…preserving those functions that proved useful and adding new functionality that results in better human-to-human interaction.”

Vaughan continues, “The ultimate goal is resilient Airmen ready to execute our missions in a downrange war fight, a home front domestic response, or build security cooperation through partnerships around the globe –to do that we need to engage families too.  Unlike the active component, ANG families are typically not centralized around large bases, but geographically distributed throughout civilian communities in 54 states and territories.  Ready Airman is designed to engage these 105,400 citizen-airmen and their families, wherever they may be.”

The new Ready Airman portfolio puts users in touch with specific care providers or resources in their area, who are familiar with issues airmen and families face.

“Ready Airman gives Airmen and families the ability to locate their nearest care provider,” said Dave Schoenberg, ANG Suicide Prevention Program manager. “Whether it’s a chaplain, Director of Psychological Health, Master Resilience Trainer, Airman and Family Readiness Program Manager, so on and so forth. Airmen and families can locate the person nearest to them, or in their geographical region, with a tap on their mobile app.”

The site also contains information for Department of Defense and Air Force resources to access assistance no matter where Guard Airmen and families happen to be.

Ready Airman’s mobile app, available for most smart phone platforms, has additional features to summon help quickly, should an Airman or family member find him or herself in an emergency situation.

“It’s called the Fearless Five,” said Vaughan. “Fearless Five allows any Airman or family member to program in the five people closest to them, who are interested in helping them in a crisis situation. In an emergency, one push of a button on that mobile app sends an urgent message, similar to an Amber Alert, to all of those five people at the same time, and not only are they notified that you’re in trouble, they then can push a button and using your GPS location, get directions to navigate to where you are and render aid.”

The site also hosts more than 3,000 independent pieces of content, including short-format mobile videos produced for Airmen on a large number of topics which are two to three minutes and designed for leaders to easily put into a briefing, commander’s call or Wingman Day program. Units hosting a Wingman Day can also take advantage of the multiple pre-built agendas, or use the site to customize their own program, Vaughan said.

Vaughan also highlighted the site’s use of crowdsourcing to help Airmen and family members find the existing resources that best work for them.

“There’s an awful lot of websites out there and one of the biggest problems is how can anyone sort through them all and know which ones to use,” he said. “We went out and found 400 websites that allege to help Airmen and Soldiers. Most of them do, but nobody can make any sense of all 400 at once. Starting this summer, everybody who uses ReadyAirman.org will have the ability to rate, qualitatively, what they’ve gotten out of each site. [Users] will be able to go through and rate each one on a 5-Star system. You can also add your comments. For example, ‘I rated this a three because of X, Y and Z,’ and you can go forward from there.”

ANG Airmen and their families are often geographically separated from their bases and have very few of those bases with housing. Ready Airman’s content is derived directly from feedback from them.

“We now have the ability to reach them with messages from ANG leadership and the CAIB,” said Vaughan. “In those messages we talk about taking care of each other, the wingman concept, Ask Care Escort (suicide prevention), and we can make those resources available when they need it.”