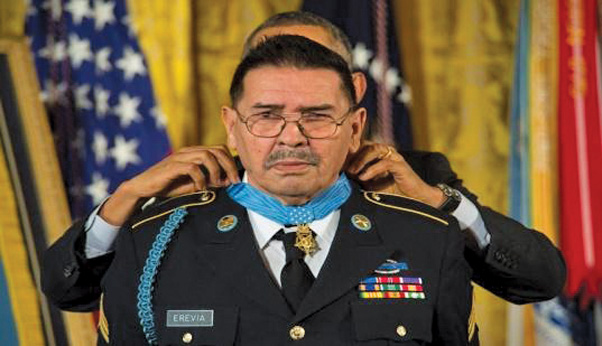 The Beacon recognizes and honors a long and proud heritage through the years. In this issue, the 2000s and 2010s.

Sonia Sotomayor becomes the first Hispanic Supreme Court Justice and the third woman to serve on the U.S. Supreme Court.

Alfred Rascon is awarded the Medal of Honor for his heroic service in Vietnam at a White House ceremony with the men he had saved looking on.

Secretary of Labor Hilda Solis becomes the first Hispanic female Cabinet member.  She was also the first woman to receive the John F. Kennedy Profile in Courage Award for her pioneering work on environmental justice issues.

Angela Salinas becomes the first Hispanic woman to hold the rank of Brigadier General.  She is also the first woman in Marine Corps history to lead one of its two recruit training facilities.

Maria Contreras-Sweet is nominated by President Barack Obama to join his Cabinet as head of the Small Business Administration. She becomes the 24th Administrator.

Julie Chávez Rodriguez, granddaughter of César Chávez, becomes Deputy Director of Public Engagement at the White House. In this role, she coordinates the White House’s efforts surrounding immigration reform and outreach to the Latino community.

President Obama corrects a historical act of discrimination when he awards the Medal of Honor to 24 Hispanic, Jewish, and African-American veterans who were passed over because of their racial or ethnic backgrounds. It is one of the largest Medal of Honor ceremonies in history.

These individuals—along with many other Hispanic Americans—have energized our nation’s diversity. Hispanic Americans continue to shape our country in a myriad of areas through their strong commitment to family, faith, ingenuity, hard work, and public service.