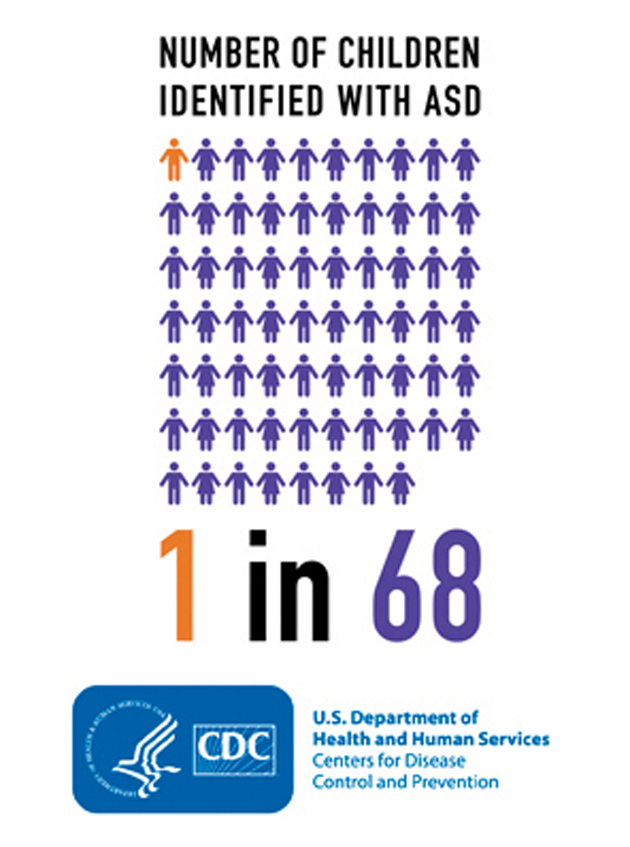 Many children are living with autism spectrum disorder (ASD), and they need services and support, now and as they grow into adolescence and adulthood. More can be done to ensure that children with ASD are evaluated as soon as possible after developmental concerns are recognized.

Findings from CDC’s Autism and Developmental Disabilities Monitoring (ADDM) Network help us understand more about the number of children with autism spectrum disorder (ASD), the characteristics of those children, and the age at which these children are first evaluated and diagnosed. These findings are critical for promoting early identification of children with ASD; planning for services for children and families affected by ASD, training for the professionals who provide those services, guiding future ASD research and informing policies that promote improved outcomes in health care and education for individuals with ASD.

1. The estimated percentage of children with ASD remains high.

2. It is too soon to tell if the percentage of children identified with ASD is still increasing or has stabilized.

3. Children identified with ASD are not receiving comprehensive developmental evaluations as early as they could be.

Previous research has not shown that black or Hispanic children have a lower risk than white children to develop ASD. However, since ADDM data showed that black and Hispanic children were less likely to be identified with ASD, it is possible that these children face socioeconomic or other barriers resulting in a lack of or delayed access to evaluation, diagnosis, and services.

5. Schools play a vital role in evaluating and serving children with ASD.

What Can Concerned Parents Do?

Parents should take two important steps if they suspect their child might have ASD:

1. Talk to their child’s healthcare provider about their concerns.

2. Call their local early intervention program or school system for a free evaluation of their child.

Parents should remember, it is never too late to get help for their child, and an ASD diagnosis from a doctor is not necessary for a child to begin receiving some types of services. For more tips about what parents and others can do when there is a concern, visit the If You’re Concerned website at www.cdc.gov/ncbddd/actearly/concerned.html.

Let your “Madness” be purposeful