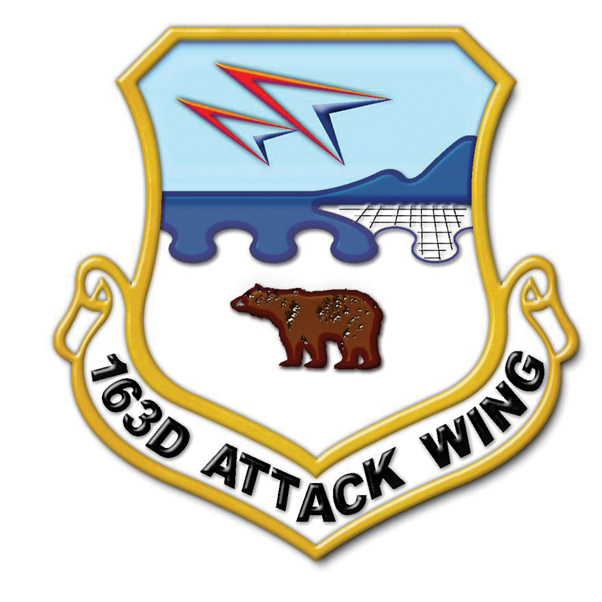 (This series, from the 452nd Air Mobility Wing public affairs staff, will introduce you to the many mission partners on and around March Air Reserve Base.)

The 163rd Attack Wing is one of five California Air National Guard units, and is headquartered here, making them one of the largest mission partners in the Team March family. Known as the ‘Grizzlies,’ the 950-member unit conducts flight operations with the MQ-9 Reaper remotely piloted aerial (RPA) system. The wing has both federal and state missions, resulting in an operation that is diverse and challenging.

When the 163 ATKW is not mobilized or under federal control, it reports to the California governor. The wing is supervised by the adjutant general of the state or territory. Under state law, the wing provides protection of life, property and preserves peace, order and public safety. These missions are accomplished through emergency relief support during natural disasters such as floods, earthquakes and forest fires; search and rescue operations; support to civil defense authorities; and maintenance of vital public services.

“We have to stay flexible at all times. Our mission is two-fold, federal and state,” said Capt. Cody Lange, officer-in-charge, 163rd Force Support Squadron. “At any given moment we can be deployed overseas to support wartime efforts or we can be asked to assist in support efforts during a natural disaster here in our home state of California.”

The 163rd Attack Wing’s units are staffed primarily by dual-status military technician and guardsmen on active duty, who perform day-to-day management, administration and maintenance of the wing’s various functions. Its technicians train with the unit and are mobilized with it when it’s activated. Active-duty members serve under the command authority of the state unless mobilized for federal duty. The majority of the wing’s personnel are drill status guardsmen, reporting for Unit Training Assemblies every month to maintain their career-specific knowledge and skills.

“The assortment of skill sets that our people bring from their civilian careers is paramount in the success of our wing,” said Capt. Jennifer Covington, officer-in-charge, 163rd Sustainment Services Flight. “That type of experience is vital to what we do here.”

The 163rd Attack Wing’s primary wartime mission is to provide commanders and war fighters, who are engaged in combat operations around the world, with real-time intelligence, surveillance and strike support against fixed and perishable targets determined to be of a time-sensitive nature. Using the Reaper, the wing is able to provide clear battlefield assessments and responsive firepower where and when commanders need it.

Steeped in a rich military history, the wing traces its roots to the Army Air Corps’ 411th Fighter Squadron during World War II. Originally the 196th Fighter Squadron the unit was federally recognized on Nov. 9, 1946 and was located at the former Norton Air Force Base, California. Initially, the unit was comprised of 12 officers and 28 Airmen, but no aircraft. In December 1946, the unit received two Stinson L-5G and two T-6 Texan trainers. Afterward, as the unit began to grow, it received a C-47 Dakota and a B-26 Invader, until the arrival of the P-51D Mustang in February 1947.

After 21 months in active service, 15 of which were spent overseas, the 196th Fighter Squadron returned to the United States and resumed state-controlled Air National Guard status. The unit was moved to Ontario International Airport, California, and transitioned to the F-51 Mustang before transitioning in 1953 to the F-86 Sabre. Years later, in 1982, another move brought the wing to March Field where they assumed a tactical fighter role flying the F-4C and later the F-4E.

On Nov. 28, 2006, the wing became the first Air National Guard unit to employ the MQ-1 Predator RPA. Fast forward to July, 2015, the Wing was re-designated once again, to the 163rd Attack Wing, making it one of the first Air National Guard units to receive the MQ-9 Reaper RPA. Armed with a new mission and a new aircraft, the 163 ATKW is once again poised to distinguish itself as one of the Air Force’s premiere flying units.