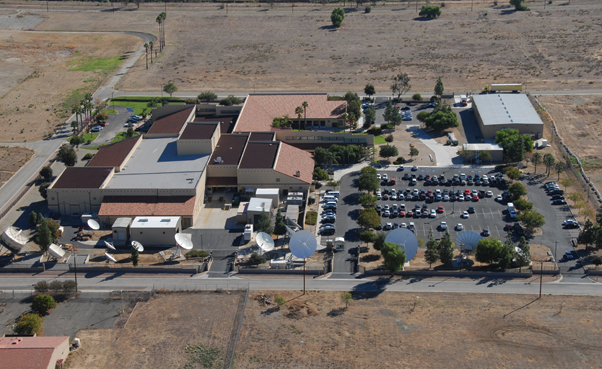 About half-a-mile from the March Air Reserve Base main gate, sits the biggest broadcast network of which many Americans are unfamiliar. It’s the place with the huge satellite dishes all around. The reason many Americans have never heard of AFN is because they cannot tune into the network in the continental U.S.  (CONUS).

The American Forces Network (AFN) Broadcast Center (BC), a Team March mission partner, sends out eight TV and 10 Internet radio services via satellite for those serving overseas. The network broadcasts to U.S. military personnel, Defense Department civilians and their families stationed in more than 170 countries and U.S. territories outside the CONUS.

The AFN’s TV services include two sports, one news, one movie and four entertainment channels.  Name a popular TV show or sport and chances are AFN airs it. In place of advertising or commercials, the AFN airs topics like force protection, military news, driving conditions and command information to keep its members informed.

Those huge satellite dishes beam AFN’s TV and radio signals to wherever American troops are located, whether on land or on board U.S. Naval vessels serving overseas.

In addition to the AFN Broadcast Center, two other organizations operate out of the Defense Media Activity (DMA) building.

The third organization at DMA Riverside, the DOD Visual Information Records Center, is the official DOD visual information records center for the storage and preservation of original visual information (VI) records depicting DOD, its heritage and its current activities. Archived photographs and video may be obtained here through a formal request process.

“Our workforce is composed of military and civilian personnel…many of our personnel here are veterans or military retirees, and use the wonderful services offered by March Air Reserve Base, such as MWR Outdoor Rec, the Fitness Center, Lodging, the ID card center, the Exchange and Commissary to name a few,” said Acting AFN Broadcast Center Director, Maj. Rosy Poulos.