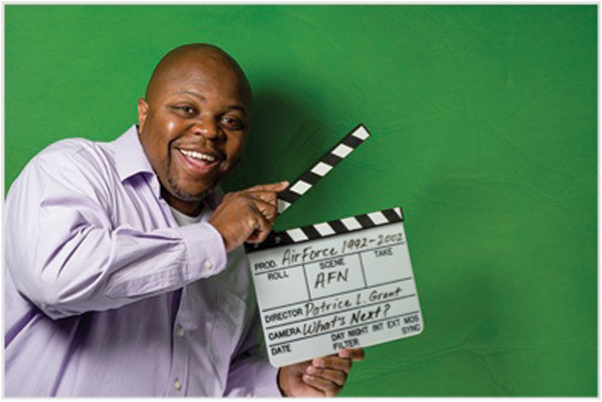 The Air Force is honoring Grant and 39 other Air Force Veterans by displaying their portraits in the Pentagon, and featuring them in “Veterans in Blue,” an online collection showcasing the men and women who have contributed to the Air Force.

Grant, a producer for the American Forces Network (AFN) Broadcast Center at Riverside, California, produces television promotions and original content for U.S. military, DOD civilians and their families serving overseas. He has a humble way of interacting with Hollywood’s elite and getting them to open up. For example, Ethan Hawke talked about his Green Beret brother to Grant. Juliana Moore told the story of life as a military kid in Germany. Halle Berry reminisced about when she met military personnel overseas. In 2014, Brad Pitt and Angelina Jolie were walking down the red carpet at the Oscars when they saw the AFN team and waited for them to finish an interview with Matthew McConaughey so they could send a message of support to the military serving overseas.

Before joining AFN in 2009, Grant was a director-producer for Air University Television at Maxwell Air Force Base, Georgia. Before that, he served in the Air Force as a combat broadcaster, Detachment 2, 1st Combat Camera, Wright Patterson AFB, Ohio, and 2nd Combat Camera Flight, Travis AFB, California. He’s also a graduate of the Military Visual Journalist Program at Syracuse University, Syracuse, N.Y.

Grant shrugs and glances down when you ask him his feelings on joining the ranks of such a select, distinctive group of 40 Veterans in Blue.

“I just love working for AFN because it gives me the chance to give to my brothers and sisters who are away from home an opportunity to relax and watch television,” said Grant.

Knowing what it’s like to serve and never forgetting his comrades helps him connect with his military audience. Certainly that’s at least part of the reason why Rock Grant’s portrait now hangs in the Pentagon.