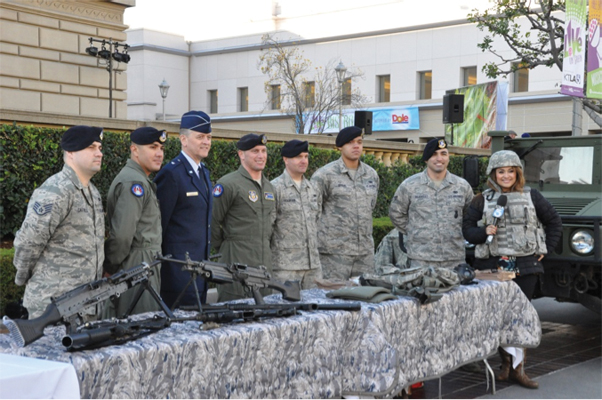 A group of 452nd Security Forces Squadron Airmen and Brig. Gen. Russell Muncy, commander, 452nd Air Mobility Wing, pose for photos during a live TV segment with Elizabeth Espinosa, KTLA reporter, at the Pasadena Convention Center and the first ever “Live on Green” event, Dec. 30, 2016. The SFS troops helped Espinosa don a military flak vest and helmet to illustrate what it’s like to wear the military gear. They also brought a weapons display and HMMWV vehicle for attendees to examine and learn about. “Live on Green” was a success, said Staff Sgt. Joshua Moffie, SFS RAVEN, 452nd security forces squadron, “We had a great time informing the general public on what we do as a security forces member and serving in the Air Force Reserve.” The Air Force Band, Honor Guard and active duty recruiters were also staged alongside the March Airmen during the event, which was created to showcase the city as it celebrates the Rose Parade and Rose Bowl game. The Air Force and Air Force Reserve were invited to participate to highlight their various missions and connect Americans to service members.