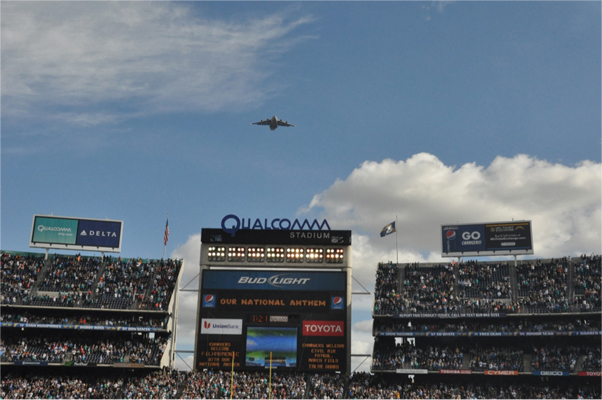 A March Air Reserve Base C-17 Globemaster III flies over Qualcomm Stadium in San Diego, California, during the San Diego Chargers final home game of the 2016 NFL season, Dec. 20, 2016. The aircrew consisted of three pilots, two loadmasters and two maintenance troops. There were also two crew members on the ground in constant communication with the pilots to ensure the aircraft flew over the stadium as soon as the National Anthem ended at exactly 1:21 p.m. Justine King, events manager for the San Diego Chargers said the timing was perfect. The Chargers rallied the crew to the sidelines during the game to recognize and thank them for their service and the flyover. This was the first NFL flyover the crew has supported and Capt. Jeff Guillotte, 729th Airlift Squadron pilot and aircraft commander during the flight, was excited for the opportunity. “What’s great about this flyover is San Diego is strictly a Navy town, so we really want to do well for this and support more San Diego events in the future,” he said.