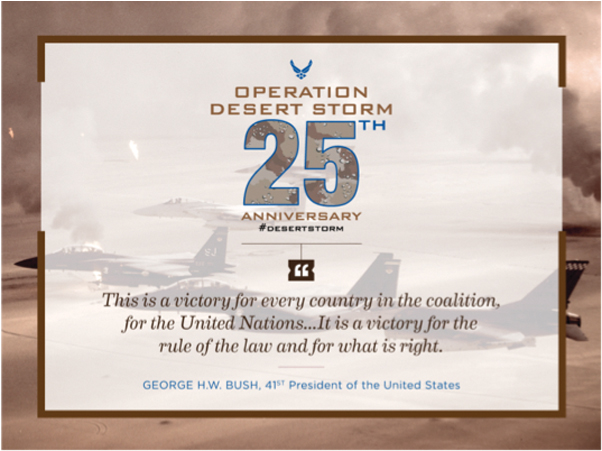 Desert Storm marks the first conflict in history to make comprehensive use of stealth and space systems support capabilities against a modern, integrated air defense.

The direct contributions of a strategic air campaign, supported by the employment of revolutionary technology by Total Force Airmen (Active Duty, Guard and Reserve) and the Coalition, enabled battlefield success.

For the Air Force, the initial phase air campaign sought air superiority. It used an arsenal of more than 30 aircraft types flying more than 69,000 sorties, ultimately propelling the Air Force to gain and maintain control of the air domain.

Technology employment during Desert Storm revolutionized the way we fight our wars today — game-changing technology like ‘autonomy, hypersonics, directed energy and nanoscience’ will make and keep the fight unfair for future challenges the our Nation may face.

The entire world is integrating Space services, debuted during Desert Storm, into every aspect of modern society, including such diverse elements as agricultural applications, transportation, public safety, and entertainment

Space is integral to the way we conduct military operations; it is more than just an enabler for other domains; space capabilities directly impact the efficiency and effectiveness of national security operations.

When the AF deployed in support of Desert Storm there were 134 combat-coded fighter squadrons; today we have 54 +1.

During Operation Desert Shield/Desert Storm, Airmen performed the most rapid airlift in history: nearly 472,800 people and some 465,000 tons of cargo to the Persian Gulf in eight months.