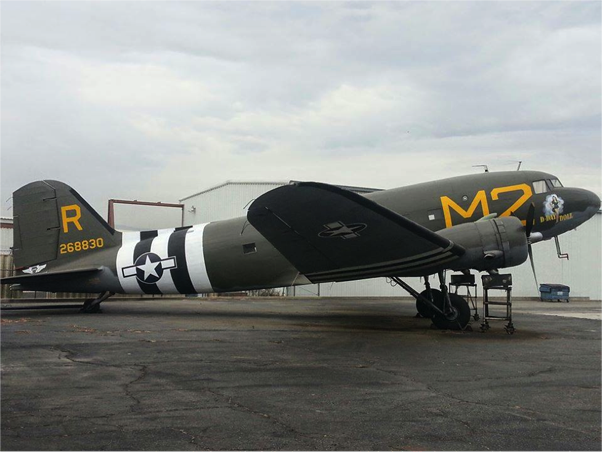 The C-53 was received by the Inland Empire Wing of the Commemorative Air Force in 2001. The twin-engine Second World War Skytrooper, which they dubbed “D-day Doll” completed a nearly year-long engine overhaul in 2015.

Built by Douglas in 1943, it played a crucial role at Normandy. The plane took part in three D-day, personnel drops, departing from RAF bases, crossing the English Channel and dropping 28 troops at a time inside enemy territory. Most of these troops did not make it, but their memories are embedded in the famous aircraft as a part of its history.

The Commemorative Air Force is primarily a volunteer group that undertakes the difficult task of restoring the historic planes from the past and then flies them for public viewing. CAF tries its best to keep its aircraft in great working conditions, but for many of these almost seventy years old aircrafts restoration process never really finishes.

The mission of the Round Canopy Parachute Team (RCPT) is to perform WWII-style parachuting activities, and conduct memorial ground services to honor all allied paratroopers who fought, and many died, to defeat despotism in Europe. They humbly do this to reinforce world-wide memory of the priceless deeds of valor, and the selfless sacrifices so many made in those brutal battles to restore peace on Earth.

The RCPT is most recently known for conducting the Daks over Normandy in 2014 for the 70th anniversary of the invasion of Normandy. RCPT and RCPTUSA combined to make 1500+ jumps at the 70th commemoration of the liberation of Normandy in 2014 without a team injury and flew 10, C-47s for eight days in five mass drops without an aircraft incident. They conduct much of their training at the WWII X-35 Airfield (Dunnellon Airport) in Dunnellon, Florida, but are located all over the country.

Here is 5 things you didn’t know about D-Day