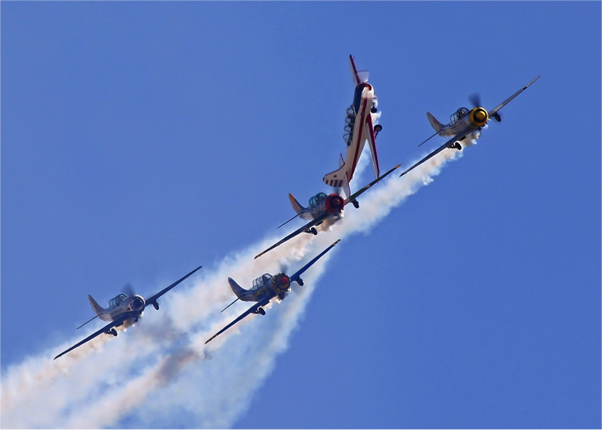 The Red Eagles fly the Russian-designed YAK-52 aircraft, the basic trainer for Soviet forces. It is rugged, reliable and relatively straightforward to operate. Powered by a 360 HP 9-cylinder radial engine (the Vendeneyev M-14P), the fuel consumption is relatively modest (12.5 – 19 gallons per hour). This rugged performer is stressed to +7 to -5 Gs and can easily operate out of unprepared fields. The “green-house” canopy provides excellent visibility and the tandem seating features dual controls. When used in the training environment, the instructor occupies the rear cockpit. The aircraft that you see today have been modified with smoke systems to enhance the performance for spectators.

The team’s lead pilot, Andrew “Limey” Webb, started flying with the British RAF as a cadet at the age of 13, flew his first jet at 17 (BAE Hawk – or T-45 as used for US Navy and Marine corps advanced jet training) and achieved his goal of becoming an instructor at 22. “Limey” has nearly 1000 hours on the Yak 52, having first bought one in the UK in 2000 and always regretted selling it – he bought another after moving to SoCal and joined the Red Eagles in 2011.

Paul “Trash” White, is new to the team this year. He began flying at the age of 12 with his first solo at 16. He flew Tomcats for 11 years in the U.S. Navy, including combat missions in support of Operation SOUTHERN WATCH and accumulated 237 carrier landings. He finished his active duty career at Strike Fighter Weapons School Atlantic. “Trash” has more than 6,000 hours and is currently a First Officer with UPS on the Boeing 757 and 767 aircraft. He is also type rated in the B737, 747-400, 757/767 and MD-11 and operates both domestically and internationally.

Darrell “Condor” Gary was a U.S. Navy fighter pilot for 11 years, completing four combat tours in South East Asia with over 500 carrier landings and 170 combat missions. He also holds the distinction of being one of nine officers who formed the Navy Fighter Weapons School “TOPGUN,” and did two tours as an instructor there. “I fly with extraordinary pilots, engage in challenging events and fly on my own schedule and best of all… no night carrier landings,” he said.

Duke “Maddawg” Molter is the most experienced member of the team with 26,000 flying hours, more than a 1,000 of which are in formation! He started flying with the USAF in the ROTC and then spent five years as Instructor on T-33 and T-38 jets, teaching formation and instrument; was awarded a Certificate of Master Instructor.

Because aviation is a critical part of America’s history and its future, The Red Eagle Formation Team is committed to inspiring youth and promoting aviation by safely demonstrating essential skills developed by our military for use in operations around the world, and to passing those skills on to the next generation of aviators. This reflects the philosophy of their sponsor Allegiant Air, “to promote safety through discipline, attention to detail and constantly striving to improve.”  Nothing good is ever easy, and to be the best requires constant effort. To learn more about the team, visit http://redeaglesformation.com.