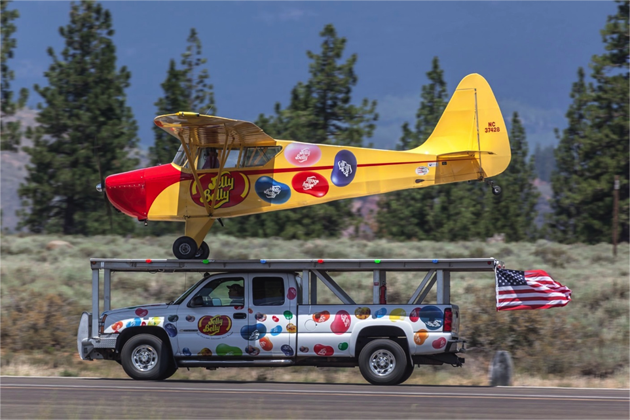 Air Show spectators around the world have been treated to the unique variety of acts performed by veteran pilot and consummate entertainer Kent Pietsch and his Jelly Belly airplanes. His shows, which include specialty acts designed to thrill audiences of all ages, showcase aerobatic stunts featuring airplanes that lose parts, engines that quit in mid-flight, and landings onto runways mounted on moving vehicles.

Pietsch has enjoyed presenting the fun of flight to air show audiences for 40 years. His enthusiasm for flying started in 1967 when, at age 16, he completed his first solo flight. His passion turned into a full-time career just three years later when he began flying commercially. In 2007, Pietsch took early retirement from a major airline to pursue his real passion of performing in the air show circuit. Around that time, he teamed up with Jelly Belly Candy Company and since then, his planes and landing vehicles have all featured the company’s brightly colored jelly beans.

As a premier air show performer he strives to show the freedom of flight. While his acts push the limits of what he and his airplane can do, Pietsch adheres to strict safety standards making him a true professional in the air show field. He has been honored with the 2005 Bill Barber Award for Showmanship, and the 2007 Art Scholl Memorial Award for Showmanship. He is also proud to have been named an Honorary Royal Canadian Snowbird.

When heisn’t thrilling air show audiences around the country, he pursues his other passion of aviation restoration in his own maintenance hangar in Burlington, ND. Along with his ATP and commercial pilot licenses, Pietsch also holds an Airframe and Power Plant Mechanic license. Essentially, he knows planes inside and out. In addition to the ongoing work required on his air show planes, he is currently rebuilding a 1929 Waco Taperwing Biplane.and a Starduster too. To learn more about Kent Pietsch and his Jelly Belly airplane, visit http://www.kentpietschairshows.com.