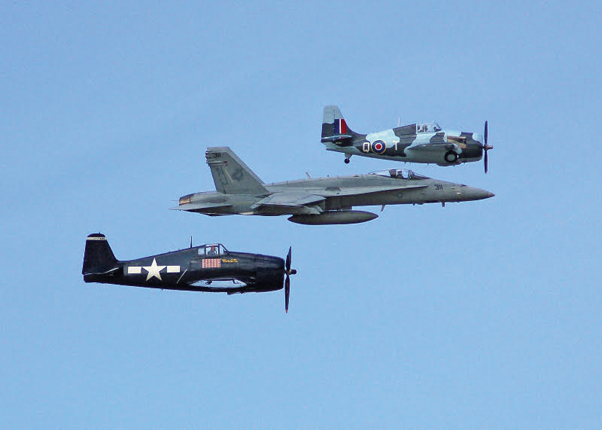 Air shows are the best place to see a VFA-122 Super Hornet, from Naval Air Station Lemoore, California, in action. The Tactical Demonstration, or “Tac Demo” team flies the single-seat F/A-18E and two-seat F/A-18F as close to the “edge of the envelope” as safety and prudence allow. The routine highlights the Rhino’s maneuverability and slow-speed handling characteristics and has been very well received around the country.

In addition to high-performance demonstrations with a single aircraft, VFA-122 also participates in “Legacy” shows in which Super Hornets fly in formation with classic warbirds like the F-4U Corsair and F6F Hellcat. Legacy shows provide a unique comparison between where the past and present and provide some great photo opportunities.

The officers who fly in the Super Hornet demonstration are veteran Naval aviators, each with years of flight experience. Hailing from around the United States, these pilots and Naval flight officers have each spent up to two years earning their Wings of Gold. After their flight training, they reported to various front-line squadrons on aircraft carriers around the globe. Many have flown combat operations in Iraq, Syria and Afghanistan and each has spent long months away from home during their time in the Fleet.

Upon completion of Fleet duties, these aviators were selected for their skill, experience and teaching ability to serve as flight instructors at VFA-122. They rely on their training to introduce the next generation of Naval Aviators to the F/A-18. From amongst the cadre of VFA-122 instructors, demonstration pilots are chosen for their abilities in the aircraft in order to showcase the Navy’s premier strike-fighter to the American people.