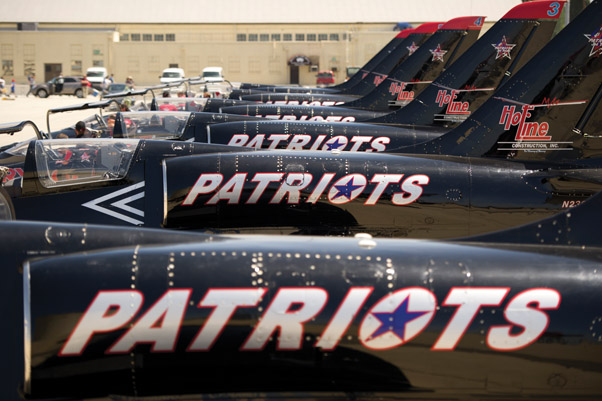 These words come to mind when watching the spectacular aerobatics performed by the Patriots Jet Team. A demanding discipline, performance aerobatic flying is a concentrated blend of technique, mastery, and style which requires professional and highly experienced pilots.

The story of the Patriots Jet Team, the largest civilian-owned aerobatic jet team in the western hemisphere, began with the vision of one person, Randy Howell. Fueled by a passion for aviation since childhood, it became Howell’s mission to create a six-jet precision demonstration team that could entertain, inspire, and educate.

This mission hit the ground running in 1999, when the first of the Patriots aircraft were purchased, followed by additional jets in 2004, 2005, and 2011. The aircraft were disassembled in Europe, shipped via truck, rail, and sea in containers to the United States. After restoration by team members, the jets were appropriately modified for use on the air show circuit, including the application of the current Patriots Jet Team paint scheme.

A talented group of pilots was first assembled in 2002 by Howell. Based in Byron, CA, the Patriots Jet Team features pilots who were formerly part of the U.S. Air Force Thunderbirds, U.S. Navy Blue Angels, and Royal Canadian Air Force Snowbirds. They have logged over 105,000 hours of flight time and performed in more than 1500 air shows. The volunteer pilots all share the same genuine passion to entertain audiences at air shows and other events, while also encouraging the nation’s youth toward careers in the aviation and aerospace fields.

In the summer of 2012, the Patriots Jet Team moved into the 35,000 square foot Jet and Event Center. This facility enables the team to house all seven jets as well as two MiG-17s under one roof, and still have plenty of room to spare. Equally important is that the skilled mechanics team can now perform maintenance at the same location.

Additionally, the hangar has become a favorite hangout for aviation enthusiasts of all ages. In support of such a large operation, the Patriots Jet Team relies on the efforts of a vast volunteer network. The comfortable, friendly, and casual environment can accommodate anything from intimate meetings to large scale events. The state-of-the-art facility is also home to the Patriots Jet Team Foundation, and youngsters come from all over to attend science and aviation classes.

With the right aircraft, the right pilots, and the perfect facility, Howell’s vision of a world-class professional team for the air show circuit has truly become a reality. The Patriots Jet Team, unique in its kind, represents an all-encompassing blend of passion, inspiration, integrity, and professionalism, captivating audiences from all over North America with exhilarating aerobatic performances.

For more information on the Patriots Jet Team visit www.Patriotsjetteam.com