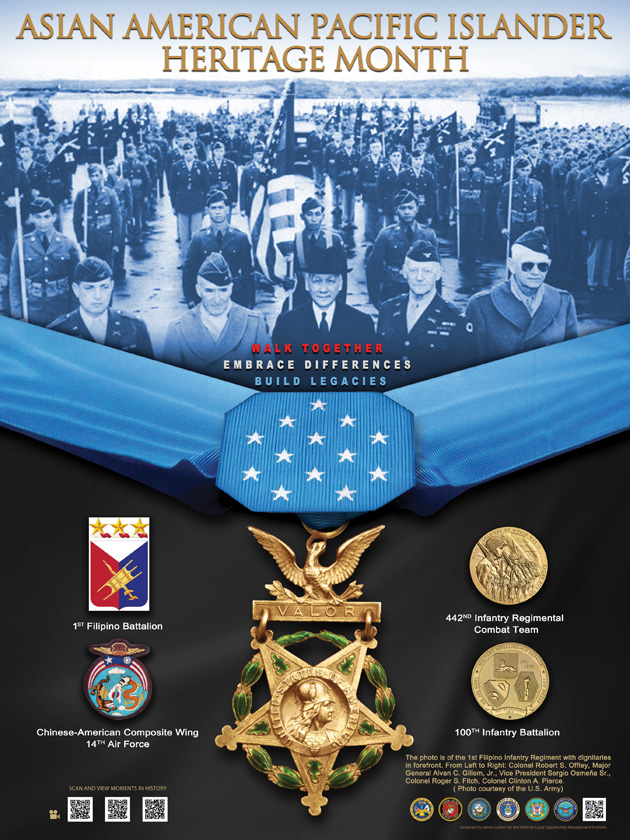 Like most commemorative months, Asian-Pacific Heritage Month originated in a congressional bill. In June 1977, Reps. Frank Horton of New York and Norman Y. Mineta of California introduced a House resolution that called upon the president to proclaim the first ten days of May as Asian-Pacific Heritage Week. The following month, senators Daniel Inouye and Spark Matsunaga introduced a similar bill in the Senate. Both were passed. On October 5, 1978, President Jimmy Carter signed a Joint Resolution designating the annual celebration. Twelve years later, President George H.W. Bush signed an extension making the week-long celebration into a month-long celebration. In 1992, the official designation of May as Asian-Pacific American Heritage Month was signed into law.

The month of May was chosen to commemorate the immigration of the first Japanese to the United States on May 7, 1843, and to mark the anniversary of the completion of the transcontinental railroad on May 10, 1869. The majority of the workers who laid the tracks were Chinese immigrants.

In celebration of Asian-Pacific American Heritage Month, the Defense Equal Opportunity Management Institute Executive Directorate of Research, Development, and Strategic Initiatives released the May Facts of the Day 2016 as follows:

• Asian/Pacific American women first entered military service during World War II. The Women’s Army Corps (WAC) recruited 50 Japanese-American and Chinese-American women and sent them to the Military Intelligence Service Language School at Fort Snelling, Minnesota, for training as military translators. Of these women, 21 were assigned to the Pacific Military Intelligence Research Section at Camp Ritchie, Maryland. There they worked with captured Japanese documents, extracting information pertaining to military plans as well as political and economic information that impacted Japan’s ability to conduct the war.

• In 2013, Brigadier General Miyako Schanely made history as the first female engineer in the Army Reserve and second in the Army to make general officer following her promotion ceremony at the 412th Theater Engineer Command headquarters in Vicksburg, Mississippi. It also made her the second Japanese-American woman to reach the flag rank.

• Ladda “Tammy” Duckworth is an American politician who has been the U.S. Representative for Illinois’s 8th congressional district since 2013. She is the first Asian-American woman elected to Congress in Illinois, the first disabled woman to be elected to the U.S. House of Representatives, and the first member of Congress born in Thailand.

• 33 Asian American and Pacific Islander veterans have received the Medal of Honor. Private Jose B. Nisperos became the first Asian/Pacific American to be awarded the Medal of Honor for his actions on Sept. 24, 1911, while engaged in combat at Lapurap, Basilan, Philippine Islands.

• Born in Hawaii, Ellison Onizuka entered active duty with the U.S. Air Force in January 1970. He was an aerospace flight test engineer before becoming a mission specialist on the Discovery and Challenger Space Shuttles. Aboard the Discovery, Onizuka and the crew completed 48 orbits of the Earth. Onizuka died on January 28, 1986 when the Challenger exploded. Sunnyvale Air Force Station was renamed to Onizuka Air Force Station on January 26,1994. The base was active from 1960-2010.

• Viet Xuan Luong achieved the rank of Brigadier General, Aug. 8, 2014, at Fort Hood, Texas. Luong emigrated from Vietnam with his family to the United States in 1975 as a political refugee. Luong’s nearly 27-year military career was inspired from his experience on the deck of the USS Hancock when he was a little boy leaving Vietnam. Almost 40 years after his rescue, family and friends watched as Luong became the first Vietnamese-born general/flag officer in the U.S. military.

• After the Japanese attack on Pearl Harbor, Hawaii, Japanese-Americans were perceived as a threat to national security based solely on their ethnic ancestry. Consequently, in 1942 President Franklin D. Roosevelt created the War Relocation Authority. Thousands of Japanese-Americans were involuntarily moved to internment camps. Despite being subjected to prejudice and discrimination, a large number of Nisei (first generation Japanese-Americans born in the United States) volunteered for service in the U.S. Army. These Soldiers served with great honor in the European and North African campaigns.

• The 1st American Volunteer Group (AVG) of the Chinese Air Force, nicknamed the Flying Tigers, was comprised of pilots from the United States Army Air Corps, Navy, and Marine Corps. From December 20, 1941 until July 4 of the following year, the Flying Tigers consisted of three squadrons of around 30 aircraft each. The nose of each aircraft was emblazoned with the face of a shark and quickly became one of the most easily recognized images of an aircraft or combat unit in World War II.

• Sunita Lyn “Suni” Williams, is an American astronaut and United States Navy officer of Indian-Slovenian descent. She holds the records for total spacewalks by a woman (7) and most spacewalk time for a woman (50 hours, 40 minutes).

• Immigration to the U.S. from Vietnam was virtually non-existent before the 1970s. The fall of Saigon in 1975 started an exodus from Vietnam that would eventually see the resettlement of 900,000 Vietnamese refugees in the United States.